IN PRAISE OF RED LIPSTICK

But every conversation about sex appeal - were we still desirable, beautiful, attractive, we asked ourselves anxiously - inevitably turned into a broader discussion about the forty-something state:  Suddenly, I became appallingly paranoid that I would wake up one morning and discover myself wearing purple with a red hat that doesn't go?
'We simply have to work harder to make ourselves visible, particularly at work' said my friend Basista, and I think she's right - one does lose the effortlessness of youth in one's mid-forties. Sometimes it's the small things like having to think twice about wearing an A-line skirt with a chunky heel - what looks hip on a thirty year old can easily look frumpy on a fortysomething, particularly if you remember the look first time round - I mean, God knows what havoc the coming Thatcher-inspired trend will wreak. All I'm going to say is, if you're old enough to remember her as Prime Minister, steer well clear of the clothes unless you're achingly hip and very obviously working in fashion.
Anyway, sometimes it's also the bigger stuff, like realising that life isn't the rehearsal it once was, and you've got to get on with the Next Big Thing before it's Too Late.
However, since this is supposed to be a post about make-up, I shall stop myself segueing off into some psycho-drama about a dawning realisation of one's mortality/career shelf-life etc etc, because I've remembered that what my friend Basista went onto say - not entirely flippantly - about how the antidote to mid-life invisibility was to wear bright lipstick. She's right, of course but it's not just about making a bold statement, it's also about the subliminal sophistication conferred by a really good red lip.
Although I'm madly keen on my shiny Dior Addict one, if it's done perfectly, a red lip should be matte and it should also be expensive - not Tom Ford spendy, necessarily, but definitely something bought with due ceremony and sense of occasion from one of the more intimidating beauty counters in a department store. Chanel, of course, is the gold standard when it comes to sophisticated glamour and there are several marvellous reds in the Rouge Allure range, but I do wish they had Rouge Premier - a copy of the first ever red lipstick Chanel produced -  as part of the permanent offer: it came out as a limited edition about ten years ago along with a killingly beautiful gold eyeshadow, and I only wear it once a year because I can't bear to think of using it all up.
Finding one's perfect red takes time and a lot of experimenting - it's all about nuance - I had fourteen at the last count (six of which are badly photographed below) in every shade of red from vermillion to crimson. 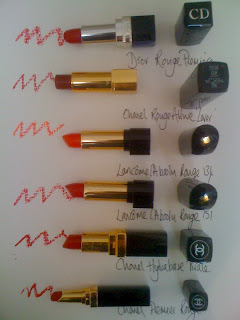 Now that I add up the approximate cost, fourteen red lipsticks is a rather lavish investment. But of course, I wasn't just buying a lipstick, I was investing in the whole idea of myself as elegant and well-put together.
I don't think the search for the perfect red is finished by any stretch of the imagination - I've yet to try the Bobbi Brown red that everyone says is a classic- and as I write this, I've just rummaged in my desk drawer and come across a very serious red I'd forgotten I even had (make that fifteen red lipsticks) - Dior Addict in Red Carpet. Possibly it ticks the 'get you noticed' box a little more emphatically than my everyday red (which I'm wearing in the Dior taxi), but that's all to the good.
Is Basista right? Is bright lipstick the perfect antidote to mid-life invisibility? It certainly seems to give one a much needed confidence boost. However, I'll offer one small warning: the distance between groomed glamour and looking like Bette Davis in 'Whatever Happened to Baby Jane' is little more than a sharp jog of the elbow. 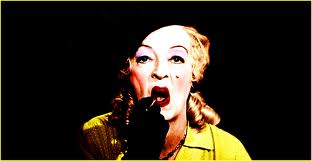 Well, I'm approaching 50 and this year decided - to hell with it, I'm cropping my hair, bleaching it and then dyeing it bright pink. Because I can and I want to. Let the buggers ignore me now!!

This post made me laugh. I looked in the work mirror at lunchtime today, and saw skinnny black trousers, long leopard print shirt, and large gold hoop earrings. Am dressing like I did in 1985. That is not right.

Ha, this post made me laugh, as today I have been sauntering round the cosmetics department at Galeries Lafayette in search of a red lipstick, I don't normally wear red lipsticks, preferring nude tones, in fact I don't think I have worn red lipstick since I was a teenager. The reason is I am going to a fancy dress party and due to the lack of fancy dress hire shops, sewing machine and too cold to fashion a sheet into a toga, I have opted to go as a member of the French resistance; midi length pencil skirt, stripy top, forties style platforms, seamed stockings, raincoat, satchel, all topped off with a beret and forties make-up. I opted for true red by Revlon, I got home tried it and guess what, it did give me a confidence boost, Basista is right, this could be the start of something new. I shall now be in search of 'the perfect red'. Word of caution though, my bottom lip is much fuller than my top lip, so I thought I would experiment by applying it with a lip brush over my top lip...not a good look, very Whatever happened to baby Jane, I will just be applying it within the paremeters of my natrual lips.

Red lipstick can look fabulous - though not on me, I don't like to draw attention to my wonky teeth. And I don't think anyone over 30 should embrace Thatcher Chic. Guaranteed to make you look like a pensioner.

I'm not sure that I'm quite elegant or mature enough to pull of red lipstick yet. I adore the look. I envy your collection.

Chanel's Passion (no.14) changed my life, literally. I went from feeling not there to there. And all with a lipstick. I think it might have actual magic powers.

I have tried every single red lipstick that Chanel makes and sadly, none of them go with my skin tone- it is tragic. So the ones that I swear by are Mac Red by Mac and Heat Wave by Nars. The non-matte, creamy one I use is a YSL one, it is simply a numbered lipstick, which I adore.

Oh, and every time I wear red lippy, my husband reminds me of the nude Laura Mercier I own, "I like *that* one better". Errm, sorry, i am not going to stop wearing red lipstick just because you don't like it, darling tee hee

It's my birthday! Party at my blog - cocktail weenies and whiskey sours for all! 8-)

I loved this post, Mrs. T. Such a refreshing antidote to the beauty tips in a recent How-to-Not-Look-Like-an- Old-Hag beauty book: The author insisted that certain age women wear only dewy pink lipstick.

In all my life I've never worn pink lipstick. It looked insipid on me at 17--and still does 30+ years later.

I have half a dozen dark red, matte lipsticks in my drawer, but still haven' t found the perfect red. Your post gives me new inspiration to begin the hunt again.

And brava to Mrs. Jones. My secret fantasy is to chop my hair into a boyish cut and bleach my locks white-blonde. Don't yet have the courage...

Are any of those lipsticks gluten or paraben free? I love red lipstick, but have to be careful about what's in them. That's why Red Apple Lipsticks are the way to go. They are gorgeous and completely gluten and paraben free! (parabens have been found in breast cancer tumors!) You should totally check them out http://www.redapplelipstick.com/

I screwed up all my courage into a ball and asked a make-up maven at the MAC counter to find me a red that didn't make me look like I'd been channelling Margaret Rutherford.

I ended up with pink.

I saw a woman in town today - probably in her early 60s - wearing a leopardskin coat with a matching hat. She looked fantastic.

So many people over 50 retreat into a world of shapeless fleeces and catalogue clothes, when they should be embracing the opportunity to express their individuality, free of any need to be 'cool' in the conventional sense of the word.

When I hit 50 in a few years' time, my sensible clothes are all going to the dump.

I only really gained the confidence to wear a red lip in the last year and I have to say it really can make you feel like a million dollars. I think a really bright fushcia as a similar power- but it's never quite as potent as RED

I have to say, I have tried and failed many times to get a red lipstick that works on me. I have come to the conclusion that neutral lips and dramatic eyes is better on me. But I'm willing to be swayed if you come up with the perfect one!

This will sound like it doesn't work, but it does. Chanel pencil (the wood one) in Sienna, and brush on Clinique Angel Red. I get a ton of compliments whenever I do that combo. My favorite was Dior's Garnet lip pencil, but since it was the perfect red, naturally it needed to be discontinued ASAP. My guess was, they manufactured it, not realizing that they had made the perfect red, but when sales went through the roof they knew it had to be pulled immediately. If the search for the perfect red were to end, women would stop spending the bazillions of dollars that we spend on hopefuls.