THE BEAUTIFUL AND THE GLAMMED 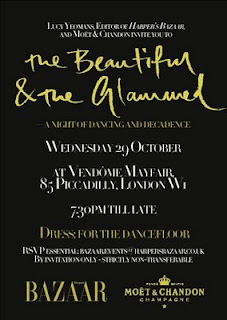 The Harper's Bazaar & Moet party promised dancing and decadence, and a whisper of 80's revival.
In practise, this mostly translated as Salman Rushdie throwing shapes to Pam Hogg's remix of The Associate's 'Party Fears Two'. The latter was a hit the same year 'Midnight's Children' was published, so perhaps it was appropriate, reminding our illustrious guest of where it all began. Still, for the onlooker, it was perhaps a little more disconcerting than decadent, albeit in a cool and glamorous kind of way. Of which more anon.

Posted by Helen Brocklebank at Thursday, October 30, 2008 No comments:

One day I must get over my addiction to lunchtime blowdries- it's hardly pro-credit crunch, and despite giving up Starbucks completely in order to offset the cost (though this was more a strike against American imperialism than an act of financial necessity) I seem to have convinced myself it's necessary to the proper commissioning of my job. After all, I can hardly be expected to function effectively with a 'hair-don't', and I need my self-belief in exactly the right place if I'm to rally the troops and drive us onto greater glory. I'm trying to convince everyone that the current economic climate is just our Agincourt, and not our Battle of Yorktown. I expect Henry V's prototype Purdy was absolutely le dernier cri, A/W 1415 and just the fillip he needed before he cried "once more into the breach dear friends".

But as usual, I digress and it's not the hair that's troubling me as I stare into the full length salon mirror opposite. It's the shoes. More specifically, a pale blue and almost impressively ugly pair of MBT's which look utterly appalling with this season's keynote grey tights and YSL-inspired cinched in peplum jacket over black pencil skirt. This look craves vertiginous heels with cruelly pointed toes: assertive, purposeful, ball-breaker stilettos with a touch of the dominatrix about them. It doesn't work with trainers. How has it come to this? Am I not the last person you'd expect to sacrifice style for comfort? Oh hear ye, all ye style victims: the day of judgement will come when God will punish you for your Vanity. As I am now, so you will be. You knoweth not the time not the hour etc etc etc.

Hmmm. I think we all know it's not God who's doing the punishing here. I am the author of my own discontent, with a big toe joint so agonisingly painful that even I can't feel the pain and do it anyway. I'm now totally over empathising with Cinderella's uglier sister in the terrifyingly grim, Grimm's version: you know the one - the only way the uglier stepsister can jam her foot into the glass slipper is to slice off her toes, and away she goes with the Prince till a bird grasses her up, flying after them tweeting 'tirrou, tirrou, there's blood in the shoe'. Nasty little sneak.

But, obviously, slicing off my toes, whilst tempting, is impractical. So I take myself off to the Royal Ballet's pet podiatrist, figuring he'd understand all about women who uncomplainingly wear crippling shoes for a living.

He looks a bit like a superannuated Patrick Swayze. Maybe an early brush with Dirty Dancing got him into the whole foot business in the first place as he ushers me to his consulting couch at one end of his tiny office and I find myself quietly mumuring, "no one puts Baby in the corner".

Half an hour and £90 later he assures me that the problem has everything to do with the way I walk and nothing to do with my addiction to fabulous shoes. This is cold comfort, since he’s also told me that I have arthritis in my big toe (arthritis? Go directly to smelly Old People’s Home, do not pass Go, do not collect £200), and another unpronounceable issue that he believes is totally curable if I wear custom-made splints on my feet every day and do vast amounts of physio. And yes, I can still wear my more fanciful heels. He says.

However, when I try to jam my feet into my best shoes whilst wearing the splints, I again know exactly how the ugly sisters felt about bloody Cinderella. The splints force my feet into such an anatomically correct position, there isn’t a single beautiful shoe I can cram myself into.

I’m devastated: I feel like the basis of my entire sex appeal has been summarily excised (and am probably still stinging with the granny-implications of the arthritis). Will I be shopping in Clarks from now on? Will Velcro become my fastener of choice? Do I really care about being able to be able to walk without pain? Is there such a thing as a sexy flat shoe?

In the meantime, before I can, ahem, hot foot it to Ferragamo in search of a sexy flat, let’s hope people are distracted by the great hair…
Peter Norman, Podiatrist: The Third Space, London W1 Tel: 0207 439 7332