Few cocktails are quite as perfect as the Negroni. The classic champagne cocktail comes close, but only when made at Claridges where the smell of (other people's) money possibly adds to the taste. I've had Daiquiris worthy of Hemingway in The Ivy Club and an amazing if mysterious something made with lemon, honey and three different kinds of whisky that the bartender at Hawksmoor once prescribed to cure my laryngitis (it didn't but I felt immensely better), yet nothing beats the aromatic,  alchemical combination of equal parts gin, sweet vermouth and Campari (& the oily twist of orange peel).  God bless old Count Negroni for being the marvellous kind of lush that would think 'bugger soda, use gin instead'.
Maybe it's because Campari is one of those things, like oysters, that sound unbearably, alluringly sophisticated when one is young but is utterly disgusting to an unsullied palate? One trains oneself to like it in adulthood and the faint sense of one's own daring never quite goes away. Or perhaps it's that it's such a low-effort, high-reward cocktail, one can make and drink it at home and feel almost as if one were in Cecconis. Sort of. With a good imagination and some decent olives. And without an eye-bleedingly extravagant bar bill.
I make mine in a wine glass - for no other reason than all my decent tumblers have been broken (life expectancy of glassware chez Trefusis, about a fortnight - clumsiness not 'Who's Afraid of Virginia Woolf' temper). I also measure the booze out with a tablespoon: the usual proportions are 25ml of each spirit, but this makes me completely sozzled, and in any case, I've lost my booze measuring thingy (is it a jigger?).
The Trefusis Negroni (much like anyone else's Negroni)
Fill a nice glass of whatever kind is as yet unbroken (yet one with a fine edge, tastes better) with ice. Home made or from Co-op, who cares, it's the chill that counts.
A tablespoon of the gin you find in the cupboard (ignore anyone who tells you it must be this, or that, gin, the kind you must go to some secret distillery for. They are wrong.)
A tablespoon of Campari
A Tablespoon of Martini Rosso
Swirl it all around with the other end of the tablespoon
Pare an orange over the glass and drop the peel in the glass. Do not be tempted to add a whole slice of orange, it messes with the alchemy.
Swirl and sniff. Drink before ice melts. On no account have three. 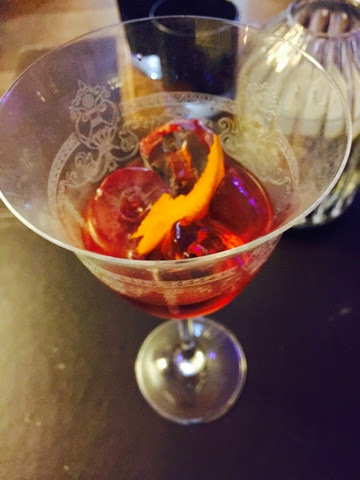 Posted by Helen Brocklebank at Tuesday, December 30, 2014 No comments: