SOMEWHERE BETWEEN THE MILK AND THE YOGHURT*


There are many things that get lost in the insane juggling act that is working motherhood. One of them is the time to read novels, and somehow I mind this far more than the lack of a lie-in, or a absence of a discernible individual identity, outside that of wife/mother/wage-slave.

Yet, women are infinitely resourceful, and even in a schedule that resembles a duvet stuffed into a pillowcase, we find tiny oases of time to pursue the things that nourish our souls. Well, sometimes: Writing nourishes mine, and I've had no time at all for that recently. But reading? That's a different matter. I swapped the twice daily strap-hanging fight-to-the-death on the Central line for a seat on the 94 bus, which lumbers slowly East in the morning and follows the sun back West in the evening, and now have the best part of an hour and a half each day to sit and read, and delight in language, and narrative.

A novel is a wonderful thing - everytime you open the pages you take a holiday in someone else's life. I'm particularly fond of those where the good end happily and the bad, unhappily and have little patience with books offering page after page of depressing wailing and uncertainty and which cheat one of a satisfying ending. Spare us your misery, says Daisy Goodwin, and I quite agree: If I want Real Life, I'll take the 266.

Of course, hanging out at bus stops and journeying on the slow poke, you notice all sorts of things, including the advertising hordings. The Milk Marketing Forum ads are everywhere, though Gordon Ramsay and Pixie Lott are not the kind of cultural icons that would persuade me to drink more milk.

I can't help but think this earlier Milk Marketing Board campaign from the late 1950's, shot by Norman Parkinson, might have been more effective. 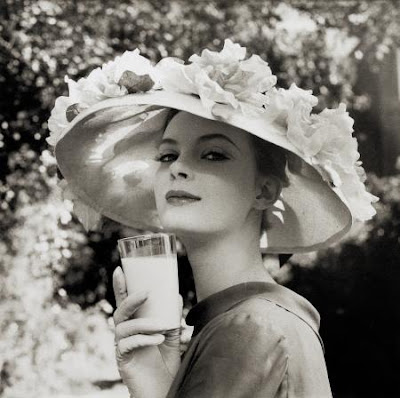 The title of this post is from John Mortimer - *"The shelf life of the modern hardback writer is somewhere between the milk and the yogurt."

I can't think this will apply to the wonderful novel I'm reading at the moment - Andrew O'Hagan's 'The Life and Opinions of Maf the Dog, and of his friend Marilyn Monroe', worth the price of the hardback for the language alone - he has Sinatra "clicking out words that shimmied over the great topics of the day". Isn't that heaven?

Norman Parkinson is at the Chris Beetles Art Gallery, Ryder Street, St James SW1, from 19th May to 12th June