When last I went to Daphne's, towards the end of the last century, it was the haunt of well-heeled euro-sloanes, reasonably chic in the way that a private doctor's waiting room on Harley Street is chic - not much going on in the way of conversation but reassuringly expensive.

Brompton Cross was always the no-man's land of the monied - entirely populated by under occupied flicky-haired women, legs like gazelles, engaged in a desultory wander round Joseph to kill the time between a blow dry at Hari's and lunch at Daphne's with her doppelgänger. Despite being a lifelong WestLondoner, I could never see the point of Brompton Cross: it seemed so determined to emphasise how out of place I was there. So I stopped going.

Anyway, it has changed. Or at least Daphne's has. Joseph, Hari's and Chanel are hardy perennials, but Daphne's has improved dramatically. Now part of Caprice Holdings (Ivy, Sheekeys, Sexy Fish etc), it has gone all Italian. Out has gone the screamingly nineties inferior decoration, and it is now Milan by way of Sloane Avenue, self assured, elegant, closer to the Caprice than to the Ivy in style and with a set lunch menu priced attractively enough to bring in the frequent luncher, not just the hedge fund crowd. Good bread, good olive oil, chilled Eau de Robinet, and there I sat waiting for my lunch guest reading the new Faber edition of The Bell Jar, and leafing through a book of Sylvia Plath's exqusite pencil drawings and marvelling at her prodigious talent. She would have been eighty three on Tuesday. Happy Birthday Sylvia Plath. 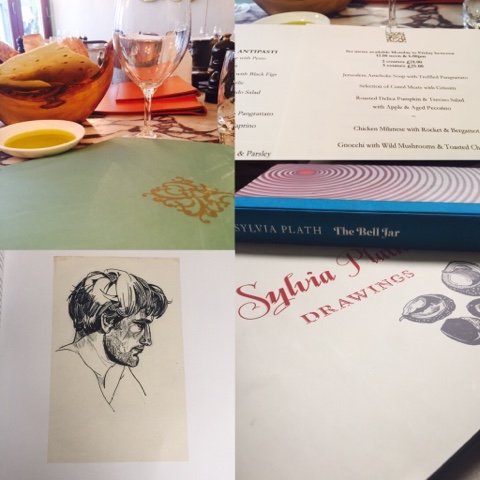 Posted by Helen Brocklebank at Thursday, October 29, 2015 No comments: