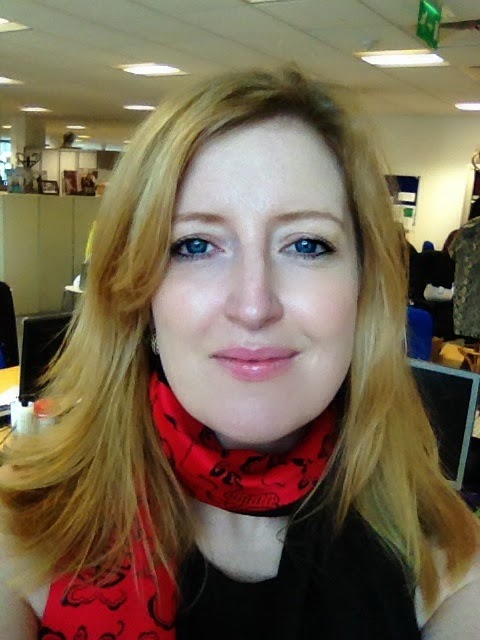 I should start with a warning: whilst blogging is by definition a solipsistic activity, this is a more than usually narcissistic post. Possibly, this is immediately obvious from the inclusion of a selfie: I'm not too proud to jump on the bandwagon, even though the iPhone camera gives me a wonky nose and makes me look as if I'm reflected in the back of a spoon.

The selfie came about because I had been trying out Clarin's Five Minute Face, which I think launches properly on counter in the UK at the end of June, but the four products I've used here are already  available. I don't really hold with the five minute face as a rule - I much prefer the forty-five minute face, using twenty four products and about seven brushes. I'm not sure it makes me look any better, but being a disciple of Joan Collins in all things, I do like to trowel it on. However, Harper's Bazaar's esteemed Beauty Director At Large Newby Hands says that over forty, less make up rather than more makes for a more ageless look, so here I am with as naked a skin as you will ever see me.

The Clarins Five Minute Face involves a BB Cream, a cream blush (shade 01), a black mascara and a lip gloss (Instant Light, Natural Lip Perfector in shade 01- is this a lip gloss? The blurb says 'lip gel' - it's somewhere between a mildly coloured lip balm and a lip gloss - nice to wear, at any rate). It took much less than five minutes. I managed it for a whole day before going back to the kind of natural look that requires hours. However, if you're the kind of person who likes to simply gild the lily before rushing out of the house, the products are most excellent, and the point of the range is to add a light dusting of cosmetic perfection on the Clarin's skin-care promise: 'you, only better'.

I digress. The other reason for posting the selfie was to show the results of December's Fraxel Dual, four months on. Fraxel's main purpose is to remove sun damage, which tends to give one the uneven, tired complexion associated with middle age, but it also stimulates the production of collagen and elastin, responsible for the texture and plumpness of one's skin, and which diminishes after a certain age, leading inevitably as shadows pass across sundials, to the old sagging and wrinkling.

Whilst Fraxel's effect on sun-damage is fairly immediate, the effect on collagen production beneath the skin takes about three months to show, so here I am after four.

I know interventions from a cosmetic doctor are not for everyone, but frankly it's done me the power of good: it's not about chasing the chimera of eternal youth, it's my version of 'you, only better'.

I asked Dr Luca Russo (who Fraxeled me) for his five anti-ageing secrets - the things that really will make a difference at every age. Here's what he told me, and none of them require lasers or needles.

1. Cleansing: remove any excess sebum/make-up.
Serums and so on work much better on super-clean skin, and it contributes enormously to a fresher, brighter look. Bazaar's Newby Hands backs this up - she is a huge fan of Clarisonic. I use a cleansing oil, but then I'm a bit sloppy.

2. Use a Vitamin C serum morning and evening.
Vitamin C is the most powerful of all the anti-oxidants: I have had a very good experience of Prevage, which is Vitamin C based, and have read promising things about Skinceuticals CE Ferulic Serum

3. Use a daily SPF 30 as soon as you wake up.
I assume this means as soon as you've cleansed your face and slapped on the Vitamin C serum, but the principle of getting a sunblock on as soon as you can is important. As Dr Russo is wont to say, 80% of skin ageing is preventable because it's caused by exposure to the sun. Sun is the enemy of the face: Joan Collins always swears by a large hat (I've seen her close up, she's eighty and marvellous), and my grandmother, who was born before the first world war and thought suntans very infra-dig, always told me to stay out of the sun. However, those pesky UVA's are everywhere, trying to make you get wrinkles, so put on the factor 30. I use Clinique's Even Better Dark Spot Defence SPF45.

4. Exfoliate every night.
[damn, I knew there was something I was neglecting. I'll start exfoliating and come back to you]

5. Use a retinol-based cream twice-weekly.
Retinol is a proven anti-ager - the best creams are prescription only, but I have heard good things of La Roche-Posay's Redermic and of Skinceuticals Retinol 1.0.

PostScript
A commenter a few months ago asked if Fraxel was suitable for rosacea - I asked Dr  Russo for his advice: he told me IPL was still the gold standard for rosacea, rather than Fraxel. I was also asked for recommendations on serums - of the department store brands products Estee Lauder's Advanced Night Repair has a well-deserved reputation or follow Dr Russo's recommendations and look for a product that's high in Vitamin C. At the moment I'm using Dr Sebagh's Rose de Vie serum, a soothing, super-moisturising, non-greasy anti-oxidant oil, designed for grown-up skin.
Posted by Helen Brocklebank at Wednesday, April 16, 2014 6 comments:

STILL AT THE EQUINOX TRAINING CAMP

Yes, yes, the usual apologies apply - after a decent start to the year, I've reverted to my old ways, and have failed to post anything of note. Work has eaten my soul, and the tiny amount of discretionary time I have, I've devoted to the pursuit of narcissism, dressed up as health, and thrown myself hell for leather into the ETC programme at a gratifyingly upscale gym, Equinox.

Although I think my enthusiasm may have resulted in something rather unfortunate happening with my left knee (hoping this is simply rampant hypochondria), the programme overall has been completely transforming - in fourteen hours of exercise, I've dropped an entire dress size, and have proper arm muscles. Rome not built in a day and all that, but it's interesting to see what can be achieved just with three hours of exercise a week. Anyway, I'm still writing it all up for Harper's Bazaar - you can read part three here and then part four, in which I'm rather dreading the end of the programme
Posted by Helen Brocklebank at Thursday, April 03, 2014 No comments: