TURN BACK THE CLOCK BEAUTY: MAKE-UP TRICKS FOR GROWN-UPS


The last time I wore this much slap, I was fourteen and given to loafing around Miss Selfridge, endlessly trying on burgundy sweater dresses and corduroy jump suits and testing their entire range of cosmetics on the back of my hand. My make-up look was every bit as eighties as the Iron Lady after whom my favourite lipstick was named: electric blue eyeliner and matching mascara, worn with a heavily frosted magenta lips, stripes of peach blusher and beige foundation with the obligatory tidemark at chin level. I was bang on trend, but looked utterly dreadful. Thinking about it still makes me shudder and the current and entirely un-ironic eighties revival has done nothing to rehabilitate the look for me.


Still, in one's Miss Selfridge years, one cares less about looking good than looking grown-up and trendy. The best part of thirty years later, the situation is completely reversed: the Barbara Cartland experience has taught me that high-fashion beauty looks must be approached with caution and, since I no longer anticipate difficulty if I attempt to buy fags or booze, looking older than my years has very much lost its appeal.


So where was I? Ah yes, I had promised , back in January, to talk about anti-aging make-up tricks. I also remember promising to post more often, but Real Life got in the way. I can't offer any short cuts - make-up that works hard tends to be hard work rather than the kind you can jab into your eye on the tube - but it will take at least five years off.

[Apologies to anyone reading this who's either under thirty five, or a man - it'll most likely bore the pants off you.]

Anyway. The basic problem as one gets older is not the lines and sagging as much as the ghastly, washed-out, careworn and tired look that develops. It's as if the cumulative effect of several decades of late nights appears all at once, and no amount of plastering on Guerlain's Midnight Secret or Clarin's Beauty Flash Balm or Lauder's Advanced Night Repair seems to make a difference. Young skin, it seems, has something almost oxymoronic: even skintone and colour. Harrumph, I say, staring despairingly at myself in the mirror, I look knackered and slightly dusty, like something on a shelf in the Oxfam shop. Dear readers, if you feel the same, I'm afraid there's no alternative than to find yourself a decent foundation: unless you have some kind of genetic miracle going on, there comes a point when flawless skin cannot be faked without it.


1.Foundation/Concealer
The trick is to find one with the right consistency: one that's not so thick it looks old-fashioned and collects in the troughs of all one's wrinkles, but which offers enough coverage to make skin look more even, conceals dark shadows under the eyes and glides over blemishes or incipient broken veins is key. Estee Lauder's Doublewear Light is the best I've found for the money (£24.50) - it doesn't settle in any lines, and nor does it need powder. I need something extra under the eyes (including on the outer corners, where there's some redness, and at the inner corners on either side of my nose: the blue shadows seem to have seeped up there too). Laura Mercier's Secret Camouflage is a product of great genius - you mix the colours to the right shade with a finger and pat it on. It's not drying, so it doesn't emphasise the, hem-hem, laughter lines. Use it after foundation, so you don't use more than you need. If you're still a devotée of Touche Eclat, get someone to take your picture with flash photography: reverse panda is not a good look.

Magazines will always tell you that foundation must be applied with brushes, or those odd triangular sponges. Nonsense: Fingers are perfectly fine. The secret is to put it on the back of one's hand, dot it over your face with finger tips and then blend lightly from the middle outwards.

A note on mineral powder: my guru in all things, India Knight, swears by it, but like Face Goop, I'm not convinced its for me.

I never thought I'd use bronzer, being pale and not always very interesting, and don't ask me why it makes you look younger, but it does. Swirl a very small amount round the outside of the face and take it under the cheekbones. You don't want to look like Kate O'Mara, obviously, but it warms everything up. Grin like an idiot at yourself in the mirror and put a pinky pink blusher like Bobbi Brown's Slopes (£16.50) on the apples of your cheeks, blending it all in. Voilá - most very extremely youthifying.


3. Definition
Ignore the Givenchy bleached brow - you'll see it touted by beauty editors this summer as a key trend, but thin, weedy, pale eyebrows are very ageing. Mine are white blond naturally, but where would we all be if we put nature in front of nurture? A strong brow gives the face definition and helps 'lift' the eye. I get mine dyed at Benefit and give them a little dusting over with a little mouse-brown eyeshadow, but even naturally dark brows benefit from a little additional colour - Laura Mercier's Brow Powder duo is wonderful and lasts forever. A tiny dab of very pale highlighter (subtly used) just under the arch of the brow also helps to fake a bit of brow-lift. Eyeliner, particularly the gel liner sort that stays put, should be worn inside the top rim of the eyelid, pushing it close into the upper lashes. This gives the illusion of lusher lashes, which sadly seem to have got a little weedier looking than they used to be.
The easiest anti-aging eye-shadow is pretty neutral - a brown smokey eye seems to be very now, but it can easily look muddy and tired. Amethyst grey - Giorgio Armani Shade 12 for example - makes a good alternative neutral, blended just above the eye socket, but under the brow bone (worn in the eye socket it makes your eyes look sunken - instant zombie effect). It goes without saying that products with a lot of sparkle or shimmer can emphasise any nascent crepiness. As for mascara, it's black all the way - all the Dior ones are fabulous, as is anything from Lancome, especially Hypnose and the new oscillating one. Wipe the excess off the brush with a tissue before applying - much as I love Pauline Prescott, hers is not the eyelash look to aspire to.


5. Other young stuff
Lip liner stops lip colour bleeding, and drawn carefully just on the edge of the lipline, can also make lips look fuller (full lips = instant youngness). Obviously, it's essential that if you're going to do this, the lip liner must match your natural lip colour exactly, and should then be smudged very gently with a finger so that you avoid the Whatever Happened to Baby Jane look.
Lip gloss is good - again it makes the lips look fuller - but I can't stand the way my hair gets stuck to it if the wind blows.

My other tip is to only ever be photographed in an extremely complimentary light, and ruthlessly delete any pictures don't show you looking fabulous. In years to come, you'll forget that wasn't how you looked every day. 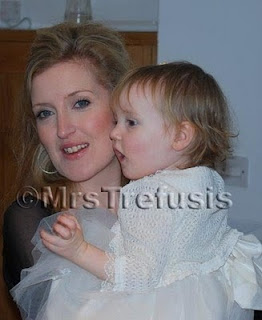 Here is an absurdly flattering picture of me in my 'look younger makeup', though I've slightly over-done the blusher: I'm far too vain to give you a 'before' picture, but if you really want to see what I look like without the slap, click here...