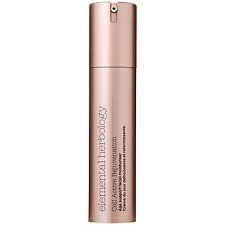 Despite sounding like a class one might take with Professor Sprout at Hogwarts Wizarding Academy, Elemental Herbology is a rather gorgeous range of beauty products designed to battle the skin damage caused by environmental factors, lifestyle and ageing.


As one might expect from the name, Elemental Herbology products are high in bio-active essential oils - I'm not usually a mad fan of anything natural - I like Zanussi skincare, packed full of the appliance of science, with as much high tech mumbo jumbo and in-vitro testing  as you can shake a stick at. Talk to me about Nobel Prize winning research into glycobiology and then segue seamlessly into Glycanactif [TM] and I'll whip my debit card out toot sweet (- speaking of which, the YSL Forever Youth Liberator products were my favourite of last year). Anyway, Elemental Herbology may use plenty of plant products, but they're not short on sophisticated technologies either - Cell Active Rejuvenation (£55)contains a selection of effective peptides to plump and smooth fine lines as well as active ingredients to stimulate collagen production and improve skintone. These, combined with the anti-oxident properties of Vitamin C and Royal Jelly, plus indulgent botanical oils to smooth, have brightened my complexion better than anything else I've tried in the last few months. The texture of my skin has also improved - probably helped by the weekly peel (see below). I have very dry skin and found it absorbed easily but it may be too rich if your skin is oily or combination - however, it's available in John Lewis and Space NK so it's worth trying on your skin before you buy.


Cell Active Rejuvenation is pitched as 'The ultimate in age-support for mature skin' which makes me feel appallingly superannuated - there's something terribly dusty about the term 'mature' - makes me think of musty tweeds, Sandeman's port and vigorous cheddar cheese - but I'm prepared to forgive it because the effects have been so good. 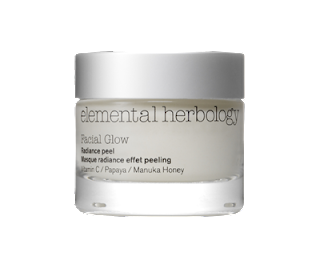 It works particularly well with a weekly mask of Facial Glow Radiance Peel (£39) - full of natural AHA's like papaya, apple and various citruses, natural anti-oxidants (Vitamins A, C & E, green tea and pomegranate), and soothing ingredients like Manuka honey, and argan, macadamai and olive oils.
The AHA's, together with some kind of very slightly abrasive ingredient, help exfoliate dead skin cells and afterwards skin looks incredibly fresh and smooth. It smells heavenly too and has sorted out an annoying (and not very mature) crop of zits that appeared on my chin without warning a week or so ago. 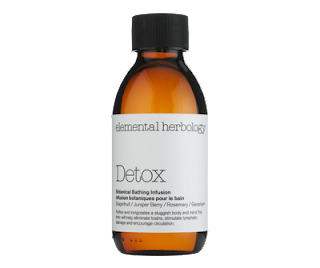 So, the skin-care is jolly good, but my hero product is Detox: Botanical Bathing Infusion. I spent both friday and saturday nights at completely marvellous parties and by Sunday was feeling - how shall I put it - a little weary and jaded. Half an hour with my big toe stuck up the hot tap of a very deep bath of Detox and I felt quite reborn. It smells completely delicious and just reading the putative effects of the essential oils (quoted below) made me believe some kind of transforming miracle might occur...


Geranium has a wonderful ability to harmonise the body while stimulating circulation and encouraging aqua-drainage.


Sweet Almond, Jojoba and Peach Kernel combine to soften and nourish the skin.

I'm not sure what it did for any cellulite or to detoxify my blood, but it didn't half sort my hangover - and that's worth £20 any day of the week.

Elemental Herbology products are available from the following outlets

and from John Lewis
Posted by Helen Brocklebank at Monday, June 18, 2012 8 comments:

PLUMDOGBLOG AND SOME NEW(ISH) BOOKS FOR CHILDREN

I spent some of the bank holiday weekend sorting out the Trefusis bookshelves, trying to make room for new favourites by getting rid of those the Trefusii had grown out of. There are some books, of course, that have woven themselves so firmly into the Trefusis family history, we can't possibly part with them. Biscuit Bear was given to Trefusis Minor when he was born and, along with Where the Wild Things Are, was read to him almost every day for years and years until we both had all the words by heart. No Fighting, No Biting and Green Eggs and Ham have also survived the cull, as has a children's story by Ted Hughes called Shaggy and Spotty, The Tiger that Came To Tea, Mog the Forgetful Cat, all Roald Dahl, of course, and Emma Chichester Clark's 'I love you, Blue Kangaroo' which is now more sellotape than book, so loved has it been.

I'm delighted to hear that there's another Blue Kangaroo story coming in August, called 'Come to School Too, Blue Kangaroo', but in the meantime, have a look at Emma Chichester Clark's adorable blog about the adventures of her dog, Plum. I can't wait to show the Plumdog Blog to The Tiniest Trefusis who is obsessed by dogs, particularly Belgian Waffling's whippet, The Weepette, with whom she spent her 'best holiday ever' and who has become, for the TT, the platonic ideal of dogs, the dog against which all other dogs are judged.

Other books the TT has enjoyed recently include The Astonishing Adventures of Awesome Man, by Michael Chabon (with lovely retro-style illustrations by Jake Parker) - it's a simple, agreeable story featuring a little boy whose alter-ego is Awesome Man, perfect for five year olds. She also liked the latest Judith Kerr - My Henry - in which an old lady daydreams about adventures with her late husband. I don't think it will become a permanent fixture on the Trefusis bookshelves, unlike Mog and The Tiger Who Came to Tea but My Henry would be a particularly good book buy if a grandparent or other elderly relative had died recently - it's sentimental without being at all mawkish and it allows one to have what can be quite a tricky conversation with a small child.


Getting Trefusis Minor to read for himself is incredibly hard - is this just him or are all eight year old boys reluctant readers? I've even bought him Beast Quest in an attempt to get him going. He loves being read to - we've been ploughing our way through the entire Harry Potter oeuvre since last November (now on book five, which feels like progress of sorts, though I can't help but wish the chapters were shorter) and I'm sneaking in my own childhood favourites like Emile and the Detectives and Professor Branestawm at bedtime too. I was beginning to despair that he would ever read independently (well, voluntarily) until he discovered the Tom Gates series, which he's zoomed through. I suppose it's because it's partly a kind of cartoon book - but I don't care, at least he is reading and has found a book that he enjoys.

Does anyone have any suggestions for other books that might capture the imagination of an eight year old boy? Or classics for five year old girls*?


*I will caveat this request- no princesses, nothing pink, and nothing in the Rainbow Fairy series. The TT loves the Rainbow Fairies with a passion, they make me lose the will to live.
Posted by Helen Brocklebank at Wednesday, June 06, 2012 16 comments: