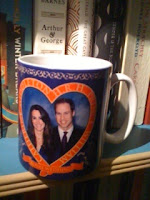 
*Trefusis Minor's rather jaundiced views on life under the British Commonwealth seem mostly to have been sourced from Horrible Histories...
Posted by Helen Brocklebank at Thursday, April 28, 2011 8 comments:

Strictly speaking, Mr Trefusis is not so much unwell as broken: A couple of months ago, he was happily free-wheeling down a hill on his pushbike and, having built up enough speed for things to really hurt, promptly hit an inconveniently positioned speed-bump and came off over the handlebars.

Thankfully, the first thing that hit the tarmac was his elbow: if the force of impact was enough to shatter his left elbow and dislocate his right shoulder, imagine what it might have done to his helmet-less head?  I mean, I can't actually quite write that sentence without shuddering and sending up yet another silent prayer that he's still here so I can make pathetic jokes about my 'armless 'usband.

Of course, he's not literally armless, but he has been a bit 'elpless, and the road to recovery is long and hard. The dislocated shoulder was comparatively easy to treat with a spot of general anaesthetic and a couple of medical students standing on his chest to wrench it back into place, but the elbow has proved to be a bit of a brute - it turns out that Mr Trefusis has a displaced unstable comminuted fracture - I may well have those words in the wrong order, but in laymans terms, it means that his elbow is as buggered as it's possible to be and still vaguely connect the upper and lower arms. Of course, if you're an orthopaedic surgeon, buggered elbows represent a fantastically juicy technical challenge, and Mr Trefusis stuffed his up enough to warrant the attentions of a professor of orthopaedics, a senior consultant, a consultant and about forty five students for his five hours in theatre, and for the follow-up treatment, all working incredibly hard to give him back an elbow. And all for free, too: God bless the NHS.

Mr Trefusis continues to look as if he's auditioning for an AmDram Richard III, with his still-painful dislocated shoulder held slightly hunched and his broken elbow crooked.
Irritatingly, he refuses to launch into "Now is the winter of our discontent" as a party piece, which is rather unsporting: I daresay if I'd been through what he'd been through I'd resent someone trying to get comedy value out of it too. But six weeks on from the operation
the consultant has upgraded his prognosis from "will regain some movement" to "may regain full mobility", so perhaps that's as much cheer as either of us needs.

Update: a little more than six months on, Mr Trefusis is now back to doing forty press ups. I think the surgeon's prognosis of 'may regain full mobility' was something of an understatement.
Posted by Helen Brocklebank at Saturday, April 23, 2011 14 comments:

At least two thirds of anything I utter starts with the words 'I'm so sorry'.  The remaining thirty-odd percent is taken up by the excuses that invariably succeed any of my apologies.

Of course - not that this is any real defence - I'm mainly apologising for sins of omission than commission. I find myself on the back foot because I am an abysmal time manager - chaotic and unmethodical, failing to differentiate the urgent from the important, or to prioritise the essential. I'm told there's a huge satisfaction to be had from writing 'To Do' lists and then ticking things off as they are done. I tried it and promptly lost the list. Then I found the list and had to add a dozen new things that had cropped up between losing the original list and finding it again. So I bluff my way through without a list, keeping some of the plates spinning in the air whilst trying to pretend I'm indifferent to the piles of shattered crockery at my feet.

This post is no different - it's all about the apology - for I am actually awfully sorry for being such a shoddy, infrequent, uninteresting blogger all year. It really wasn't how I started, honestly: when the world for me was shiny and hopeful, and I was less weary, I posted quite often. Few weeks go past without me resolving to write more often, but then a lack of time and imagination get in the way again, and before I know it, it's a month since I last wrote anything other than my signature on a stack of invoices and some terse emails, bashed out on a Blackberry on the bus. Like everyone else, I suppose, I keep buggering on, post-recession - in a world where we all have to do more, with less, and for less, and that's as big a time thief as any. Yes, being time-poor is a good excuse, but is it really a reason?

As far as writing this blog is concerned, if I continue doing nothing more than saying sorry and making excuses all I'll do is hold the snarling dog of guilt at bay.

I do wonder, though, if I say 'sorry' a little too reflexively:  Am I using it away of acknowledging the things undone without including any of your actual, you know, repentence? What is the distance between rueful and contrite? I have a suspicion that if an apology is heartfelt, it should include more than guilt and remorse, and be all about a fervent desire not to repeat the error?

If I resolve to write more often, and actually manage to do it, at least I'll have resolved something. Who knows, it might show me that I could apologise less, and do more in other aspects of my life too. I'll give it a whirl.
Posted by Helen Brocklebank at Tuesday, April 12, 2011 18 comments: