LIFE THROUGH A LENS 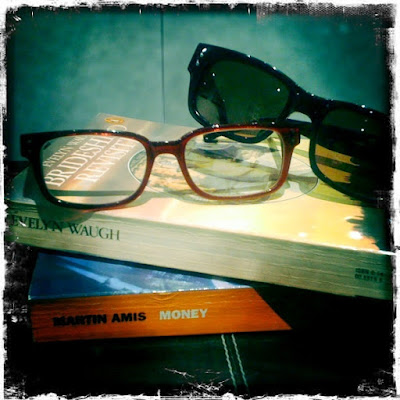 'When was the last time you read a book?' asks Mr Trefusis one evening, 'You used to read all the time.'

'I do read.' I say indignantly, but I know Mr Trefusis is right - I was once a book bulimic, devouring novel after novel, forever on holiday in someone else's imagination. But lately I've found it tiring to read more than a few pages at a time: it's started to take weeks rather than days to finish even a thriller. I've blamed work (too much of), twitter (distraction), Angry Birds (ditto), but really the truth of the matter is as plain as the lines that are springing up all over my forehead: I can't do without my reading glasses. If I try to, even reading Harper's Bazaar becomes too much of an effort, which seems a shame considering it's the magazine I work on.

'Presbyte' says Mr Trefusis, somewhat eliptically, 'that's what the French call you, from the Greek for Old Man.'

And so it is: as confirmed by my optician, I have the kind of long-sightedness that's inevitable after forty, and, although it's helpful of Mr T to contribute to my education by offering me the French for long-sight, presbyte makes me feel as if I ought to come over all Calvinist and start railing disapprovingly about the sin of vanity.

It's no good though: presbyte or not, I still want to look good. I want my reading specs to be fabulous face-furniture, rather than just something practical: I want glasses of distinction. What's more, I want glasses that scream an elegant protest against the presbyte diagnosis - I might be old enough to need them, but I am not so old that I want to entirely relinquish looking vaguely hip and moderately sexy.

The first glasses I bought were the insanely expensive Bulgari pair you see sitting on the laptop in the holding shot of this blog. It's to my shame that I immediately went off them - they're fine, but - you know - they're a bit dull. Realising that it's deeply inconvenient only having one pair of reading glasses, I had some lenses put in a pair of Emporio Armani frames that were discovered unclaimed at the back of the fashion cupboard, but they're also a bit ordinaire. I mean, obviously I'm too grown-up to suddenly go all Hoxton, and sport statement frames like a self-consciously trendy architect or  app developer, but there is a middle ground, surely, and one which doesn't necessitate eating baked beans for a month to afford the bill.

Reader, I think I have the answer - London Retro is a new range of vintage-inspired frames, seemingly designed with me in mind. Ok, that's a little solipsistic, especially when there's enough edge in the range to please my imaginary Hoxton dwelling architect, but really, all boxes ticked - cool and interesting frames and they come complete with single vision lenses for £99 with a second pair free, which seems astonishingly cheap in the context of the Bulgaris. I have Carnaby in red, which have a wonderfully 1980's ad agency feel to them and Camden with a tinted lens for reading outside (have previously felt very foolish wearing sunglasses on top of reading glasses).


London Retro specs are only available online, but all you do is imput the details of your prescription into the right box and a couple of days later they arrive on your desk, all gleaming and fabulous - kind of like a net-a-porter for spectacles - and despite the price-tag, the quality is at least as good as my existing Bulgari and Armani pairs.


I'm slightly worried now that specs are going to replace shoes as my guilty pleasure - I love the Carnabys, and they definitely suit me, but I do also rather fancy something a bit edgier: these below are next on my acquisition list, just as soon as I've finished all 974pp of Belle du Seigneur to prove that I've really earned them.