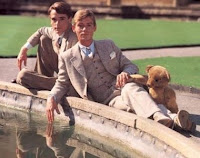 Cast your minds back if you will, dear readers, to the mid eighties. For those of you who were only tiny tots, you'll just have to use your imaginations. Britain is in the grip of Thatcherism, the Miners Strike is drawing to a close, and I have Billy Bragg's EP Between the Wars playing on a loop on my Sony Walkman. Any telephone conversations too private to conduct in the hallway at home take place in red telephone boxes, endlessly pushing 2p's into the slot as you hear the frantic beeps indicating you're running out of money. No one has heard of email, and there is one computer in the whole school, so precious it has its own room, and only A'Level maths pupils are allowed near it.

Every inch the right-on New Romantic in my winklepickers and 'vintage' great coat adorned with CND badges, open to reveal my Katherine Hamnett '58% Don't Want Pershing' t-shirt, I march up to a door on a relatively middle-class housing estate and knock on the door.

'Hello,' I say, politely, 'I'm canvassing on behalf of the Conservative Party'. This being Oxton ward and not Rock Ferry, I don't have the door slammed in my face, although the harassed mother, pushing her curious children back inside the house, does say rather quizzically 'You don't look like a Conservative' before accepting my leaflet and waving me on.

Quite true. I didn't look like a conservative. I wasn't one. I dressed my politics. Being far too young to vote, or to have a mortgage or pay tax, I had Convictions. I was deeply on the side of right not Right, and very proud of my militant connections, though these were only my cousin's husband, Lecturer in Trade Union Studies at Wolverhampton Polytechnic and the fact my other cousin had once been to Greenham Common.

You may have spotted some contradiction here. Why was I canvassing for the Conservatives whilst carrying a copy of Marx for Beginners in my pocket? The truth, dear friend, is terribly simple: Sex. Or romance, really, if you're feeling faint-hearted.

This being an unsophisticated decade, and not awfully yoof-friendly, there were very few places to go for the enthusiastic teenager to meet members of the opposite sex. Church was out, naturally - far too much chastity and singing - so that left politics. I simply couldn't bring myself to fancy anyone with from the Young Socialists, all dirty-fingernails, Real Ale, irritable vowel syndrome, and making you go Dutch on everything.

I'm afraid that then, as now, I fancied Tory Boys. I preferred them with a small 't', since I was much less interested in their politics than the fact they tended to have an allowance, access to their mother's car, decent manners and nice clothes. I probably should never have been allowed to watch Brideshead Revisited, since it seemed to have imprinted a 'type' upon me at an impressionable age but certainly it left me with the idea that the working-class hero wasn't going to work for me. Tory boys weren't deeply trendy, but then, life was ever a compromise and I have a passion for posh.

Nor did I admire the dreary sincerity of the Young Socialists: their meetings were full of earnest discussions about society and they talked a lot of politics. The Young Conservatives Association didn't bother with anything so obvious: apart from wandering about with a few leaflets come the council elections, I don't remember politics coming into it at all. Oh, except once, when in a wave of enthusiasm we had a debate: I stood against the motion, This House Wholeheartedly Supports the Nuclear Deterrent, and I won in a resounding victory, rustling up a little support for Conservatives against the Bomb in the process. On the whole, going to the Young Conservative meetings meant drinks, idle chat, illicit cigarettes and the promise of a Saturday disco.

In retrospect, I do wonder why they let me hang out with them, given that I was as volubly anti-Thatch as Ben Elton, and literally wore my opinions on my sleeve, given my predilection for slogan badges. I think they were simply too polite, and too middle-class to mention the elephant in the room, enthusiastically waving a red flag. Possibly I had novelty factor. Certainly, I enjoyed trying to shock them with my subversive opinions, and it gave me a nice warm feeling of contrariness which is always pleasing when you're 16 and full of yourself.

As a dating strategy, it was a great success. The tory boys had frightfully nice manners, and conducted themselves chivalrously, hugely in favour of making sure you had a seat and buying you a drink. They also took the trouble to properly chat you up before getting sweaty-palmed and pouncy during a slow dance to Careless Whisper. Good snoggers without exception, they'd had evidently taken an O'level in undoing bras with one hand. And these being more innocent times, seemed content with an above the waist and below the knee diktat. I still get slightly quivery when I think about the rough border terrier feel of a tweedy tory boy embrace and the hot steamy smell of damp wool rising from sports jacket during an enthusiastic tussle in the front seat of a VW Golf.

I think my appeal lay in the allure of the transgressive, of snogging outside one's postcode. A date with me looked like rebellion particularly since I made great show of reading The Guardian and Cosmopolitan in an entirely fictitious attempt to look liberated and sexually enlightened.

Nearly a quarter of a century on, the placards and badges long since consigned to the dustbin of history, I only read The Guardian online, and never open Cosmo, and my political opinions have mellowed to a point where they're not even brought out for dinner parties. As I watch Mr Trefusis leave for work, dressed in a very snappy suit and an Hermes tie, all properly polished shoes, good cuff-links and an innate knowledge of the correct use of the apostrophe, I realise that I've never quite outgrown the appeal of tory boy chic.

PS: Mr Trefusis would have you know that it's not that I like the politics, I just like the floppy hair and the well-cut clothes....
Posted by Helen Brocklebank at Friday, November 01, 2013 23 comments: