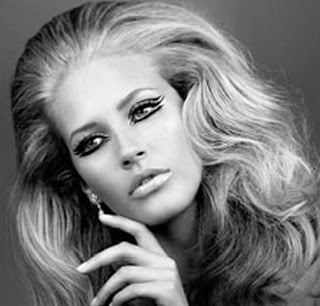 I am in Daniel Hersheson having my hair blow-dried for an upscale magazine's awards ceremony. The hairdresser is tattooed from head to toe (only his face is clear, but that too looks threatened by the encroaching cabbalistic whorls, piratical signs, Chinese emblems, and other whatnot). He is also wearing a black leather cap on a shaven skull, an haute-Catholic rosary, the full compliment of facial jewellery and has his jeans underneath his arse in the modern way. He is clearly extremely impressed by himself. But what's even more disconcerting is the way he appears to be drying every hair individually, then when he's about to take the brush out of it, bending down and kissing it.

Is he living in the Shampoo of his own life? Am I supposed to be playing Julie Christie to his brought-up-to-date-for-a-contemporary-audience Warren Beatty? Is this more Blow-up than blow-out? Is this all going to end horribly badly, or could it be the start of a mutually rewarding relationship? I do always slightly regret eschewing the attentions of the wealthy American who took an unhealthy interest in my shoes at the Ritz one evening (but I was in a terrific hurry and didn’t really have the patience to indulge the fetishistic whims of a stranger in the lobby of a hotel, but I have always rather wondered whether it wouldn’t have been a case of fair exchange being no robbery – his slavish devotion to a well-turned ankle and narrow foot, and my penchant for seriously expensive shoes). Putting fantasies of free twice-weekly blow dries – albeit off-beat ones – to one side, I pay his, ahem, styling technique closer examination. I think I’m relieved to discover that he’s actually blowing on it – presumably to cool it down and set the curl. Very strange. Finally, his creative genius exhausted, he brandishes a vast bottle of Elnett, and I’m done.