MRS TREFUSIS AND THE STROKE OF NOON 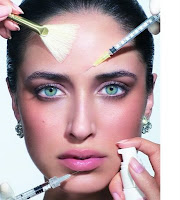 "I really, really need Botox", I wail to Mr Trefusis, hauling my brow up into my hairline where it belongs. "Then have some Botox", he replies, logically, if a little less flatteringly than I'd like.

On this note, I have some advice for all men: when women start to pull their face about and talk about cosmetic intervention, it's merely the grown-up version of 'does my bum look big in this' and your response should never be truthful. A little polite protestation about the years not having taken any kind of toll is appropriate, before steering the conversation to safer waters. If you don't feel it's laying it on too thick - and only you know the fragility of your beloved's ego in these matters - then a suggestion that she could give her similarly aged friend a few years can also go down well. If you're the poetic sort, I can recommend some cheesy hand-holding accompanied by quoting John Donne - "No spring nor summer beauty hath such grace/As I have seen in one autumnal face...". But gentlemen, you must do this with conviction and without crossing your fingers behind your back.

Of course, the older one is, the less likely one is to ask anyone if one's bum looks big - as the fabulous Catherine Deneuve is supposed to have said, after a certain age one must choose between one's face and one's behind, a few kilos can work wonders to plump out the lines and wrinkles. Callipygian women who look like hags from the front impress no one. The last word on the face Vs arse debate must go to Nigella Lawson: she's 52 and is ravishingly beautiful. I've seen her several times at The Wolseley and notwithstanding its gentle lighting, she could give most 35 year olds a run for their money. And for all women faced with this choice, I give you Sara Blakely, the inventor of SPANX, who was deservedly named in TIME 100 this year as one of its 100 most influential people in the world.

But as ever, I digress. I haven't exactly chosen the most tactful moment for railing against the aesthetic ravages of the passing years: Mr Trefusis's birthday is in a couple of months and if anyone should have the floor for a moan about getting older, it's him, particularly as it's astonishing how much older than me he is since I gave up having birthdays myself. But he doesn't seem to mind the years. In fact, he's always telling people he's older than he is: this is a strategy that hasn't really occurred to me - perhaps the idea is that people are always seriously impressed by how young you look if you're always claiming you're into the next decade. It doesn't really work for me. I prefer to be vague or dodge the question. After all, as Oscar Wilde once said 'A woman who will tell you her real age will tell you anything'. And I've always liked his idea that 'London is full of women who've been 35 for years'. Quite right too.

But lately, I've been having something of a mid-life crisis about the affect of age and gravity on the looks. I know that it's merely a metaphor, and I'm simply displacing a vast amount of angst about age vs accomplishment (youth being wasted on the young blah blah blah) onto my obsession with my appearance. I know I should get over it. But I don't want to look my age. At least, not until I've reconciled some stuff and at the moment the years are sliding past as easily as nails down a blackboard.

I do wonder whether I'm going to end up like Corinna from Swift's poem 'A Beautiful Young Nymph Going to Bed' - it's all available to the modern woman - £200 anti-wrinkle creams, hair highlighting, chicken fillets for your bra, teeth whitening, eyelash extensions, false nails, fillers, not to mention the Botox...though I hasten to add I haven't indulged in all of these. I still look more or less the same after I've got ready for bed as I do beforehand. 40 watt soft tone bulbs help.


I make some idle protest to Mr Trefusis about Botox being a terrible waste of money and that I should get to grips with what's really behind my inability to proudly announce my true age. I believe I even offered some rubbish about my wrinkles being lines of experience, wisdom and character. Of course, he believes me a lot less than I believe myself when I'm offering up this kind of nonsense.

I've dabbled in botox before - I had a couple of sessions a few years ago with the beautiful Preema Vig, whose skill with botox and fillers is the secret behind many a well-known face and at the beginning of this year I went to Dr Rita Rakus, who was also very good and whose clinic is strategically placed near the back of Harrods so one can look as if one's in the market for a spot of upscale shopping and then exit through the Laduree tea room for 'rejuvenation' hem hem..... I confess I liked my three run-ins with botox very much indeed - it fixed my annoying Roger Moore-style eyebrow raising habit and made me look like a fresher, happier, less wearied version of me: it's gratifying how much better people respond to you when you look peaceful and friendly rather than suspicious and cross.

Botox may have replaced beautiful shoes as the thing I long for most, but since the Great Trefusis Economic Crisis kicked in, I can afford neither. And perhaps that's good for me. Perhaps I have to learn to live with the face that time and experience has given me and be grateful for it, rather than gazing mournfully at myself in the mirror like a superannuated Narcissus and seeing nothing but the sand running ever more rapidly through the hour-glass. Just because a little light cosmetic intervention can give the appearance of having turned back the clock, doesn't mean the years aren't there. Hmmm.

And on that note of solipsistic existential angst, I'll go and see what I can do to spruce myself up with makeup.

oh God I'm desperate for the dreaded Botopx, I hardly need it, but prevention better than etc etc...And I NEVER thought I wld say that. It's just having always looked at least five years younger, now I'm nearer 40 than 30, I suddenly understand what it's like to see age creep up on you...But, as I have No Money... tant pis...LLGxx

Could we start a Botox fund? I was stunned to find out just how many friends had secretly been getting topped up in the eye region, now that austerity is pinching and they can no longer justify it. I've been reading up on skin food and anti-oxidants all weekend, apparently it takes 6 weeks to notice a difference, I'll start on Monday then...
w1mum
x

I'll go for the 'eat more pies' option. I too have no money plus I prefer pies to needles. (I'm putting a brave, wrinkled face on it).
Helena xx

I loved this one Helen. it reminded me of a certain someone we both know who invited people to her 40th Birthday party - two years in a row! In the words of Patsy Stone 'I'M 39'!!!

I read recently that a study found Botox helps with mild depression because when you can't scrunch your face up in a frown, you feel happier. That's the answer: it's a medical need; the resulting relaxed, lovely countenance is a pleasing side effect. My insurance co. would never pay for Botox, but mayhap you could convince NHS?

I've been trying to figure out how to put weight on my face for years. Never had Botox, never will - and this isn't just because I can't afford it. I'm following the Brigitte Bardot route (yikes!), though have to admit Nigella looks fabulous at the moment - and she's definitely had a little help.

Really really don't want Botox, and I am very ancient.

Also, Mrs Trefusis, you are a radiant young beauty and it is all in your imagination.

I might be delusional here, but I disagree w/the 'choose between ass & face' wisdom. I'm 40, and find that when I've gained a few, the jawline hangs heavier, and the nasolabial folds deepen. It's as if the whole cheek area gets heftier, and the skin has a harder time supporting it, so the whole bit sags more?!