HOW TO GET AHEAD IN ADVERTISING 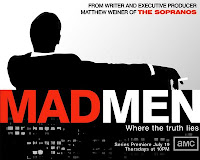 Trefusis Minor joins me the bathroom as I'm massaging into my face the requisite matutinal unguents, evidently in search of something. His eye alights on the Parazone, which he waves aloft.

"Mummy, why do they have programmes for this in the middle of the cartoons?" He enquires and I realise that advertising to small children is extra potent because they have no concept of what an ad is, and make no distinction between the validity of advertising and programming or editorial. I can't think why I haven't realised this before since it's blindingly obvious, but since the editorial context is the highly credible adventures of Shaggy and Scooby, I guess an ad for bleach doesn't necessarily have more or less integrity.


Anyway, Trefusis Minor hasn't finished: I'm about to hear an infomercial on bleach, live in my own bathroom. "This is very strong, Mummy, and it's only to be used in emergencies. Other things like this [he brandishes the dettox spray at me] are fine for just ordinary cleaning up, yeah? But this is for really tough things"

"Thank you, TM, that was very helpful. I'll be sure not to use too much of it then, shall I?" TM nods vigorously and I try to explain a bit about advertising which only results in a complicated and involved conversation about car ads, specifically the Honda one which is apparently stupid because "everyone knows a car can't transform into a robot". I wish account planners in ad agencies had TM in a focus group.

It's not the first time Trefusis Minor has taken an interest in advertising and branding: over Christmas he referred to a series of ticks on a page in a magazine as being 'sports signs'. It wasn't an ad for nike either. And he's always keen to recommend new household products he feels I might find useful, though having a fine understanding of his mother's personality and interests, he only ever points out those that promote themselves as being 'with silk' or 'the fragrance of black orchid' or whatever other nonsense they're putting into fabric softener these days. He's a good all round ad man, is TM: he's not just interested in the creative, he's also grasped the notion of targetting.

I ponder all of this, and wonder if I should worry about the influence of commercial messages on the young and impressionable. Then I remember that I've spent my whole career promoting the virtues of one product or another and realise the infant Donald Draper is merely a chip off the old block.
Posted by Helen Brocklebank at Thursday, January 15, 2009