As the recession bites, the cogs in the corporate machine bite harder. One spends ever longer slaving over a hot spreadsheet, trying to create magic formulae that will stop the numbers leaking off the page. Incessant demands rain down from on high for yet more strategies and even cleverer ideas. Vast swathes of time are laid waste sitting writing reports on what one would be doing if only one wasn't forced to sit and write a report about it.

And now that the series of measures designed to reduce the cost base has been implemented, one has even more work, because there are fewer people around to help you do it. Broadly speaking, one has to work triply hard to stay standing still, and I like nothing more than being left alone to make use of the idle minute.
So when another meeting is scheduled in the boardroom to discuss trading - or to 'share ideas' - my heart sinks even lower in my Pedro Garcia shboots. Two hours carved out of my day, sitting round an enormous table drinking bad coffee is its own particular kind of hell.

I've long since given up wondering if these Kafkaesque examples of corporate comradeship were secretly scripted by Martin Lukes, as colleagues discuss amiably whether they have the required bandwidth [tr: enough people ] or if something's actionable [tr: we can get on with trying to sort it out, as opposed to get the lawyers involved], or suggest escalating an issue. I spent a lot of time drawing confused doodles in my Smythson notebook before I realised this had nothing to do with making things worse, but simply meant it should be pushed upstairs for someone higher in the food chain to deal with. One is tempted to feed in bonkers stuff, exhorting people to 'get the potato on the fork', though in this environment the response would no doubt be that they were following Atkins.
In truth, meetings here are - management-speak aside - remarkable for the rational, open, professional and timely way in which they're conducted, with plenty of emphasis on debate and frank discussion.

But lately, and particularly in the wake of the recent issues, the tenor of these meetings has changed. People no longer speak out, or up. There is no more debate, or disagreement, or sticking of the head above the parapet. There's a new meekness, a subservience, an interest in toeing the party line. But what was more astonishing than anything was the dramatic sartorial shift: at least three-quarters of the attendees were wearing suits. This is a magazine company, not the civil service: employees are used to expressing themselves through their clothes and having the freedom to wear what they want when they want, whether it's 'trying incredibly hard' high fashion or dress-down friday chino-chic. The lines between 'home' clothes and 'work' clothes had become eroded over the last 15 odd years to the point where people no longer had a work uniform. Jeans were commonplace - albeit those with a hefty price tag, and worn with fabulous shoes.
And yet, overnight, the dress code has changed, reflecting a new, cautious, serious mood.
It's not just here, it's all over town - reports suggest that even at the top end, bespoke tailoring has never been more in demand: it's one of the few fashion categories that's in double digit growth. When you're a hedge fund manager and your fund is making pots of money for the client, no one cares if you're dressed in Havaianas and a pair of cut off denim shorts. But now things are tighter, and people more risk averse, it seems only the seriousness of a made to measure suit will do to convey the seriousness with which you take the guardianship of your client's money.
It's as if some new sumptuary law has been put in place: the economy and people's uncertainty about their jobs has rendered decoration, individuality and flair in poor taste. Clothes are cut along austerity lines, in sober neutrals. Waists are nipped in. Fabric used with a parsimony not seen since Molyneux, Worth, Amies and the rest of the Incorporated Society of Fashion Designer united in 1941 to create thirty-four utility clothing designs, with the CC41 label (Civilian Clothing 1941) sewn inside. 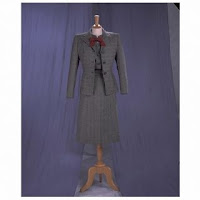 In 1942, the British government issued the Civilian Clothing Order, which made illegal the decorating of clothing with additional buttons, embroidery, extravagant cuffs or other frills and furbellows.

But in 2009, it seems we are more self-regulating. And it's not merely 'street-fashion', a trend coming consumer up rather than designer down: the key looks on the A/W 09 ready to wear runways also had strong tones of tailored austerity chic, and with the exception of the price tag, could have come straight out of the pattern book of those 34 Utility designs.
Prada set the tone with its boiled wool dresses, with slim, belted waists and defined, tailored shoulders.

Even Lanvin took an unusually sotto voce, pared down approach to severe tailoring, albeit one with a defiantly sexy edge

And me? Despite bellyaching about the way meetings appear to be a viable alternative to real work, I'm sure I'll be as suited and booted as the rest of them before the next session in the boardroom comes around.
If you want to be seen to be waging war on economic armageddon, better make sure you're in the right uniform.
Posted by Helen Brocklebank at Friday, May 08, 2009

adore how your post moved seamlessly from economic recession to it's effect on the fashion world. from an economist's pt of view- this herd mentality has distorted the market and brought it to its knees. however, what is worse, though, is that this herd behaviour-inconsistent w rational decision making- is now visible in your office. what would martin lukes write to his minions? "we need our own TARP, a 'Toxic Attire Recovery Programme'. Ta muchly."

How interesting. Working from home, I have lost touch with what people wear in the outside world. I look forward to the [images to come] portion.

really interesting post. I don't work in the same type of office but we have a 'media' dress code and I have noticed this a bit too- and also felt myself thinking, I really ought to be dressing in a more classic fashion because everyone else is.

Nipped waists sound good but I do hope it doesn't mean that every one will wear only black for season after season. So depressing.
WV = persevin - persevering to save ones purse perhaps?

Great post. I wonder how many people who define the company line appreciate that encouraging an open and creative approach to the business process is even more vital in straightened times.

So true about the insouciance in dress that used to prevail at mags: by the end of my prison sentence at Vague House, I was slouching into the lift in Converse & jeans and not an eyebrow was raised.

Even tho now at my somewhat more advanced age, I feel no need to prove myself professionally, if I have a meeting or anything even vaguely work-related, I am in a tailored dress or even a tux and cigarette pants. It seems important to look the business LLGxx

It was drilled into me at a young age to always "look the part" which even to this day, I tend to do.
It was taken to extremes when I was younger. My father arrived at my boarding school one weekend to take me to Oxford to shop. He was under the impression that all 14 year old girls should have a suede suit, and couldn't comprehend that I wouldn't find that useful at school. It took me hours to veer him off that idea.

Fascinating. Are the men wearing ties too?

Re: manangement-speak, a friend of mine once attended a conference and during a drunken moment, jokingly suggested that they should all have a 'power breakfast' the following morning.

To his dismay, nobody saw the joke and six hours later, he found himself taking part in a 'brainstorming' session over the Coco Pops.

I always have a policy: If management speak words are used more than fifty times during the first hour of a meeting I suggest mildly that this problem would be easily sorted with a four foot pachyderm with three feet of tubing. More often than not someone will duly try to order an elephant. MH

O dear, reading your post about meetings deprived me of the will to live, as they used to do when I dwelt in meeting rooms and gnawing my right leg off was always the most entertaining and least frustrating option. Go you, Mrs T. Loving it.

Fascinating post, beautifully written as usual. Can't decide whether I am finding the sartorial shift depressing or amusing, especially as it is self imposed and does not necessarily come with a pared down, utilitarian price tag - surely the point of the original austerity? There seems to be more than a whiff of Marie Antoinette about it all..
However, I am certain that you, Mrs. T will look both sexy and charming with your nipped in waist and severe, unadorned suit - only serve to set off the wit and beauty better.
WV tubill - you send them the invoice, ma petite?