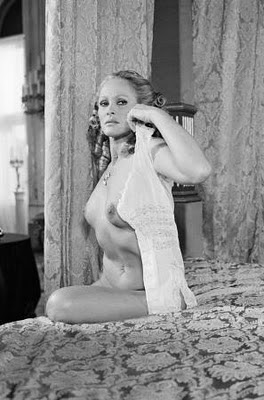 In the days before personal trainers, Madonna and Rachel Zoe-inspired no-sugar, no-wheat, no carbs, no-food diets, it seems actresses simply sucked their stomachs in for the camera.
I like it. Ursula Andress would've been in danger of asphyxiating herself if she'd continued to hold the pose, but she looks sensational, and frankly an awful lot sexier than half the lollipop-headed hard bodies that seem to be de rigeur in Hollywood today. Take a look at the picture and think about how it makes you feel about the one-size-fits-all, identikit take on female beauty that we’re all being sold these days.

The image is taken from a new exhibition of Terry O’Neill’s photography at Chris Beetles Gallery, Ryder Street, St. James. Between 17th February and 6th March, Chris Beetles will show a collection of unseen images from the iconic photographer. It’s also the very first time Terry O’Neill has made his vintage prints available for sale.
One of the many wonderful things about the work is the extraordinary access O’Neill was granted: From the semi-nude Ursula Andress above (pictured, aged 43, on the set of The Fifth Musketeer in 1979) to Michael Caine posing with his ‘Get Carter’ shotgun or Audrey Hepburn taking a dip in a pool between takes, O’Neill charmed his way into taking shots that would give today’s celebrity publicists heart failure.

Look at the images online here, but if you’re in London, don’t miss what promises to be one of the year’s great photography shows.

NB: An apology... the second part of the On Beauty makeup post will come... I'm just being slow and distracted.
Posted by Helen Brocklebank at Thursday, February 04, 2010

Wow, as you say she looks stunning.

A big Boo Hiss to the 'only the boney' approach to beauty.

Amazing bone structure, she really won the genetic lottery with that.

Shame sucking in your breath does nothing for the arse, though.

Still fab and I wish I had very deep pockets.

Oh yes, completely agree. Very reassuring and refreshing to see such womanly beauty. And yes sucking ones tummy in (or using tummy sucking underwear) does wonders for ones figure!

I shall have to try and get along to the exhibition sounds wonderful!

Thanks for this post, I love the earthiness and the look of the women photographed during the late fifties and early sixties. Another fabulous photographer from this period was Edward Quinn, amongst other things, he covered the Cannes film festival for Paris Match, but eventually gave up, I think I read somewhere it was because he started to get pissed off with manufactured beauty and the end of real glamour.

You're absolutely right, Ursula Andress. Heaven knows where I got Faye Dunaway from - God, i am distracted at the moment, and really not thinking straight at all. All corrections made now...thank you!!

It is a beautiful photograph, I love @Angpang's comment about what a shame it is that we cant suck the bum in! x

I love this photo, and you're right actresses in the seventies and even the eighties used to do that. Those of us who do Pilates also know that the more you do suck your tummy in the flatter it gets, so there might have been a method to their madness. No surgery required.

I love this photo, and you're right actresses in the seventies and even the eighties used to do that. Those of us who do Pilates also know that the more you do suck your tummy in the flatter it gets, so there might have been a method to their madness. No surgery required.

Looking at that picture instantly made me suck in my tummy...

I hope you don't mind but I have mentioned you on my blog, having written a post inspired by yours.

Cherished By Me said...

I think a lot more of us would feel better if that type of photo was the norm....I think the majority of us could aspire to look like that. But....faced with the pictures of ultra skinny air brushed women, no wonder self image is so low nowdays. Thanks for posting the picture, I suddenly feel better about my stomach that has born the ravages of bearing five children. ;0)

At least Nova has the excuse of five children. My excuse is more along the lines of five lion bars... I was at Chris Beetles just the other day, looking through their sale for something I could afford. Bargain - an Eileen Soper drawing for £20. If I go back for the Terry O'Neill I must remember to leave my wallet behind.....

I agree wholeheartedly in theory but I still wouldn't mind being a lollipop (sadly). Don't throw rotten tomatoes!! It's just that you can wear anything!!!!!

Hilarious! That picture! Love it...

Amazing bone structure, she really won the genetic lottery with that.