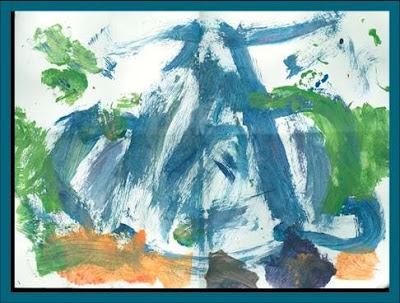 Blustering through Abstract Expressionism:
an exploration of the early work of Trefusis Minor


It is tempting to interpret Trefusis Minor’s work, particularly that from his recent blue period, exclusively as abstract expressionism, but this would be wrong. In fact it would be to underestimate the sheer emotional power of the work and the interplay with langue et parole – the disconnect between what is seen and what is meant. Certainly, a painting like Windy Beach I, 2008, shares a surface similarity with Twombly’s later abstract works, but while Twombly draws on memory, fantasy, and the irrational to create works of art that are visual analogues of classical myth and allegory, Trefusis adapts from the world around him, creating a coloured tone poem from his experiences of every day life, yet inviting us to move beyond that, from natural drama into psychodrama, and to step from reality into the imagination with all the joyful curiosity of a child.

Of course, Like Twombly, Trefusis Minor has, at this point in his artistic development, rejected the figurative and representational – though for Trefusis this remains, perhaps, in the subject-matter – citing the line or smudge – each mark with its own history – as its proper subject. Trefusis’ work has echoes of Twombly’s romantic symbolism, but with a bolder, more direct – even confrontational – edge, inviting the viewer to collude in the mise-en-scene by offering a title that can be interpreted visually through shapes and forms and words, but then rejecting that interpretation.

Interlaced in an all-over configuration, without significant focal points, the bold, swirling brushstrokes of the painting generates dynamism and energy; a continuum so charged that it seems to expand beyond the picture limits, evoking an immediate sensation of boundlessness, an endless space that is the natural world.

Trefusis Minor’s success as an artist lies in his ability to evoke the big questions. How are we to evolve unless we see ourselves as rooted in the natural world? In a world where man feels compelled to impose order, what room is there for the spontaneity of nature? What role does faith and trust in a wider plan of the universe play in these godless times? These are questions that will linger with the viewer long after they have moved away from the painting. Above all, though, Windy Beach I – like much of his early work – leaves us with a much more personal message: experience is predicated on risk, and to avoid the opportunity to explore the boundaries is to avoid engaging with life.


Not long after Trefusis Minor, aged four, swabbed a large piece of paper with colour and produced the picture above, I spent a morning with the Abstract Expressionists at Tate Modern and came back and wrote this pastiche of grand art criticism as a joke to amuse a friend. I love the swirly-nothings that children produce before they have the requisite control over a pencil to painstakingly represent their worlds with stick men and spider-figures, and since all mothers see their offspring’s daubs as prodigious works presaging future genius, I’m sure there was a part of me that wasn’t entirely in jest.
As I write this I’m staring at a couple of Trefusis Minor’s latest works taped to my office wall – one is of Batman, with huge feet and very pointy bat ears, and the other is a rather fine Spiderman, with several arms, to indicate he’s moving very fast, much in the manner of the Russian Futurists. You see – I can’t help myself – even now, I’m convinced he’s part of a great art movement.
Posted by Helen Brocklebank at Friday, June 11, 2010

You didn't study History of Art at uni by any chance?

Hugely enjoyable particularly for some-one whose best friend did the Sotheby's MA and is prone to this kind of language....I usually throw at her my MA litcrit in the same vein. Oh we know how to have fun.

Wonderful! This says so much about the majority of art criticism I read. "Tone Poem" is particularly prevalent it seems. Thanks for this; I might even permit myself a most unusual (for me) LOL!

To be honest, this is easily as good as most of the stuff in this year's (or any year's, come to that) Royal Academy Summer Exhibition.

Interesting how you see this piece of work and think "it could be by Cy Twombly" whereas when I endured a Cy Twombly exhibition I remember thinking "this could have been done by a four year old". And don't even start me on Rothko.

Honestly, that's as good as anything I've seen in a gallery.

Trefusis Minor is destined to become a great player on the abstract scene.

Unless, of course, dinosaurs assert their rightful place in his oeuvre.

Dear Mrs T, that is so funny and so well done, I also think my boys are great artists, not so much for the art work produced but by the way they have already embraced the artistic life style: chaotic goings on, a cavalier attitude to social conventions and personal hygiene, and dreadfully melodramatic pronouncements ("It will never ever be the same again"). They are 7 and 9.
Blighty

Dear Mrs Trefusis
Please will you write the text for my forthcoming exhibition? What a brilliant parody - it would fit right in to any formal arts journal. I really think you should submit it to one...

Great use of colour, and style.. love kids art so much x

That's a beautiful picture.I'm quite partial to blues and greens myself.

Wonderful critique...and a rather lovely painting!

But the truth? Master Trefusis' painting IS stunningly beautiful.

I hope you framed this lovely painting and have it hanging someplace prominent--but away from direct sunlight that would fade those energetic slashes of Prussian blue.

I repeat a word oft-used by the above commentators: "wonderful" !! X

Hands down, this is the funniest thing I have read all year.

I, too, hope that you have gallery framed it and do tuck a copy of this masterpiece of commentary at the back.

I am dead serious.