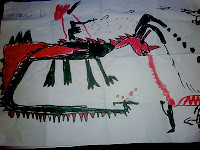 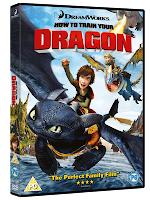 And, as Trefusis Minor says, 'Dragons are actually in Real Life. they're different from ones in the films because they're Komodo dragons who can't spit fire or fly but they do have armour and they are dangerous because they can spit poison and they are big and scary and strong and can defend themselves'
Posted by Helen Brocklebank at Sunday, November 14, 2010

Email ThisBlogThis!Share to TwitterShare to FacebookShare to Pinterest
Labels: how to train your dragon, Mr Trefusis, trefusis minor

I rarely watch the film when we venture to the cinema (hurrah for twitter on iphone!) But I loved 'How to Train a Dragon' for all the reasons you described.It held my attention, unusually for a children's film, most are such DROSS. The flying scenes were a squillion times more fun than icky Avatar. Lovely post. x

Yup - that's on the list for Christmas. Young Knight is not yet into the dinosaur or dragon phase, but he's well on his way. He's drawing crocodiles.

My dad is also mad on dragons (second childhood I think!). I shall be ordering that for him for Christmas, he will absolutely love it. Thank you! I hope all's good with you xx

My almost 15 year old loved these books and thought the film excellent - it bothered him not a jot that the cinema was full of much younger children, in fact he could be happily hired to babysit anyone for repeat viewings! He may well find the DVD in his stocking...

I thought that it was a wonderful film - not read the books yet here.

It's a teeny bit of a shame that even Viking teenagers are of the US 'whatever' type of kid...which now the behaviour my 10 year old Scottish son thinks is so hideously cool to mimic.

Enjoy the dragon phase because when it's replaced with the nazi zombie phase things just get plain weird ;-)

Here in China dragons are EVERYWHERE, they take their dragons very, very seriously.
The chinese word for dragon is 'lung' (pronounced long) because dragons are deaf. They have nine special characteristics. A dragon whether large or small has a head like a camel's, it has horns like a deer, it has eyes like a hare, its ears are like a bull's, its neck is like an iguana's, its belly like a frog's, its scales like those of a carp, its paws like a tiger's, and its claws like an eagle's. It has nine times nine scales.
On each side of the dragons mouth are whiskers, under its chin or floating just out of reach is a bright pearl, on the top of its head the 'poh shan' or foot rule, without which it cannot ascend to heaven. The scales of the dragon's throat are reversed. When exhaling its breath changes into clouds from which can come either fire or rain. The dragon is fond of eating the flesh of sparrows and swallows, it is afraid of the mineral iron and swords made of iron. The dragon shuns contact with the centipede and silk dyed with five colours!
You can buy dragons made of jade, bronze, porcelain, stone or glass. They are carved from wood, embroidered on silk and printed on T-shirts.
I think Trefusis minor would like Chinese dragons.

Trefusis Minor is quite right - everyone loves a dragon. And what's not to love? We have not advanced to dragons in our household yet, but the Impster made a dinosaur puppet a few months ago and sent it to her Auntie Al with a dictated note explaining that it was a GIRL dinosaur. Not one of your run-of-the-mill boyish ones. Maybe you could ask Trefusis Minor which is the more deadly, the female of the species or the male?
xx

Nice review! We passed on this in the cinemas, think we need to check in home movies.