SARAH CHURCHWELL & THE BOOKS THAT BUILT ME 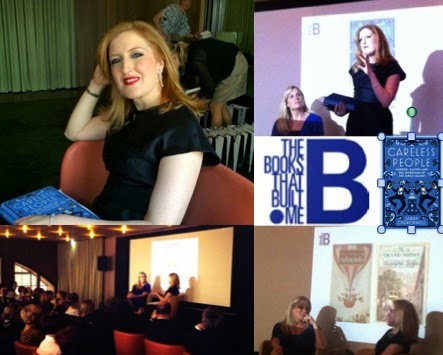 Last Thursday evening, in the elegant setting of The Club at Café Royal, I played literary hostess to Sarah Churchwell, author of Careless People, Murder, Mayhem and the Invention of The Great Gatsby, in the first of a series of salons called  The Books That Built Me.

The Books That Built Me is an idea borne of the belief that inside every book-lover is a memory-palace full of stories – tales of enchanted princesses and magical beasts, of smugglers, spies and buried treasure, stepmothers and boarding schools, something nasty in the woodshed, loves lost and found, vanquished enemies – perpetual summer holidays in other people’s imaginations. None of us is the book we’ve just read, we’re the sum of all the novels in our lives – the books that built us.


In a sense, that's is the inspiration for The Books That Built Me, but its catalyst was something I read in Elizabeth Jane Howard’s autobiography, Slipstream. She reminded me it’s not only readers who are built of books, but authors. Howard was, by virtue of her marriage to Kingsley Amis, stepmother to a teenage Martin Amis, who apparently read nothing but comics, Harold Robbins and ‘the dirty bits in Lady Chatterley’s Lover’. He's about sixteen, I think, when she asks him what he wants to do when he’s older. ‘I'm going to be a writer, Jane’ he says. Howard stares at him, askance,

" ‘You – a writer? But you’ve never read anything. If you’re so interested in writing, why don’t you read? He looked at me and said ‘give me a book to read then.’ And I gave him Pride and Prejudice. "

Howard goes onto give him a reading list that adds Dickens, Scott Fitzgerald, Waugh, Green and Golding to Austen, and these are the books that built Amis into the author he aspired to be.

So the purpose of The Books that Built Me is to bring to life a writer’s reading list, not an exhaustive one, but a sample of the books that have stayed with them, comforted or nourished them or informed them as a writer.  It's also a literary desert island discs, or as Sarah Churchwell put it so beautifully, 'how the books you love meet the books you write'.

The Club at Café Royal is an exceptionally chic and appropriate place in which to host a literary salon - the Café Royal’s reputation could be said to have been built on books, counting many literary greats as frequent visitors, Oscar Wilde and Virginia Woolf amongst them. Virginia Woolf links the Café Royal to Harper’s Bazaar, for whose support I’m very grateful – Woolf wrote a number of short stories for Bazaar, never published outside the pages of the magazine until after her death. I’d also like to thank Penhaligons for scenting the room with their Juniper Sling, in homage to F Scott Fitzgerald’s favorite tipple, The Gin Rickey, and to Prestat for the delicious 'Art Deco' chocolate in the goody-bags, and to Carat* for lending me diamonds so I could feel properly swanky when up on stage.

The Club at Café Royal created a delicious Careless People cocktail for the evening -  a beautiful, jewel-coloured blend of vodka, plum sake, pomegranate juice and fresh lime juice, served in a cocktail coupe with a curl of orange zest: 'suddenly one of these gypsies in trembling opal, seizes a cocktail out of the air, dumps it down for courage and moving her hands like Frisco dances out alone on the canvas platform....The party has begun'.
F Scott Fitzgerald, The Great Gatsby, quoted in Careless People in a chapter that so glitters with detail you step straight through a magic door into one of the real jazz-age parties that inspired those in Gatsby.

The Club at Café Royal is ordinarily only open to members. For enquiries please email membership@clubcaferoyal.com or telephone +44(0)207 406 3370 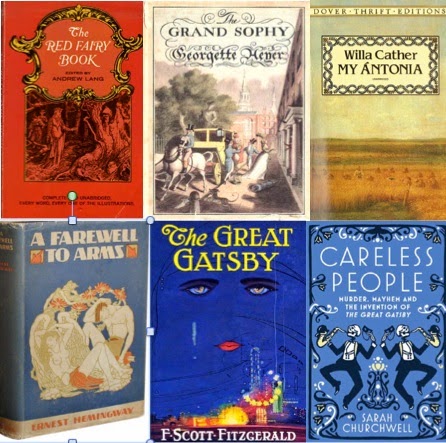 The Books That Built Sarah Churchwell
1.F Scott Fitzgerald, The Great Gatsby: subject of Careless People, her 'histoire trouvé'. Gatsby is, she tells us, the book that 'taught her how to read as a writer', a 'litmus test'
2.Andrew Lang's Fairy Books: Andrew Lang's fairy books are a compendium of every familiar and unfamiliar fairy story.
3.Georgette Heyer, The Grand Sophy: screwball comedy meets Jane Austen.
4. Willa Cather, My Antonia.
5. Hemingway, A Farewell to Arms, The Sun Also Rises (with a nod to Eliot along the way, not so much for his being one of Sarah's desert island books, but because like Cather, Fitzgerald and Hemingway, Eliot is another extraordinary writer that bubbled from the literary wellspring of the American Midwest: I'd add Sarah Churchwell to that list. Interestingly, Eliot, Hemingway and Fitzgerald all, like Sarah, migrated to Europe - only as expatriates were they able to write so eloquently about America.
6. Careless People - the book, which as Harper's Bazaar wrote, 'will make you rethink everything you thought you knew about The Great Gatsby.' It's an exhilarating read and a stunning piece of scholarship, a unique literary biography which reconstructs in exquisite detail the year in which Fitzgerald set his finest novel.

Careless People, Murder, Mayhem and The Invention of the Great Gatsby is published by Virago.
Follow Sarah Churchwell on twitter @sarahchurchwell - she is giving the London Library Lecture at the Hay Literary Festival on The American Dream - do go.

The next Books That Built Me will be on Tuesday 1st July. Details will be published next Wednesday, 28th May.

Email ThisBlogThis!Share to TwitterShare to FacebookShare to Pinterest
Labels: careless people, georgette heyer, great works of literature get you into trouble, Sarah Churchwell, the books that built me, the club at cafe royal, the great gatsby

Wonderful idea! Wish I could have been there. Good to read about it instead. Good luck for next one

And after visiting the bookstore, how I wish that the US edition had the same charming cover as the British edition!