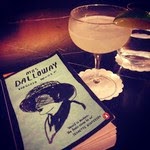 A little over six years ago, in the days before blogging and tweeting and all the rest of the social media folderol, I sat in a black cab, clutching a copy of Mrs Dalloway, staring out into another London, thinking of Septimus Warren Smith as we drove past Regents Park,

Men must not cut down trees. There is a God. (He noted such revelations on the backs of envelopes.) Change the world. No one kills from hatred. Make it known (he wrote it down). He waited. He listened. A sparrow perched on the railings opposite chirped Septimus, Septimus, four or five times over and went on, drawing its notes out, to sing freshly and piercingly in Greek words how there is no crime and, joined by another sparrow, they sang in voices prolonged and piercing in Greek words, from trees in the meadow of life beyond a river where the dead walk, how there is no death.

Six years ago, in that cab, I was only idly thinking about writing a blog - everyone had a blog then, why shouldn't I? - I didn't know what to call it, but there was Mrs Dalloway, not Clarissa Dalloway but Mrs and it seemed to me, newly returned to work after maternity leave, that nothing had changed in in the intervening eighty-five years; women were still defined by their relationships with men.

And as the taxi carried me up and over the Westway towards home, I felt that I, too, could make my own kind of quiet comment on that; choose Mrs yet append it to a surname that was neither my father's nor my husband's, but one that tangentially reminded me of Woolf. So there it was and I was, Mrs Trefusis Takes a Taxi; my own, odd, homage to my literary touchstone, and my acknowledgment of the debt that every woman writer owes to Woolf.

Mrs Dalloway is a book that pays with repeated re-reading: every time one comes back to it there is a new book inside, waiting to be unwrapped. I've spent every Tuesday evening this September at Wendy Meakin's literary salon at The Club at Café Royal, reading Mrs Dalloway with a group of fierce, clever, interesting people, teasing out its secrets, listening to other Mrs Dalloways, attempting to articulate answers to Wendy's incisive, provocative questions about the text - how long it is since I heard a book called a text - hoping the friction might conjure sparks in long-dormant synapses. It was a bootcamp for the brain: six weeks on and I feel intellectually fitter than I have since university. It can't last - I will ruin myself again with vampire books and Jilly Cooper, but just for a bit I felt I could cut it in a conversation about Freud and Saussure and Barthes. I bluffed my way through when Lacan and Foucault came up, but I was never that hot on lit crit, even as an undergrad.

Anyway, this year, my Mrs Dalloway was Septimus Warren Smith's Mrs Dalloway - in no small part, I'm sure, because we're all so immersed in the centenary of the Great War. I'm not sure I'd stopped to think before how well Woolf articulates the unhealed and unheal-able wound the war had left upon Britain in the early twenties - soldiers returned from the war, alive but 'in rats' alley, where the dead men lost their bones', and her own experience of mental illness allows her to portray the sufferings of shell-shocked Septimus and the hopeless inadequacies of treatment - isolation, enforced inactivity, over-feeding, with extraordinary insight and compassion.

Septimus was one of the first to volunteer. He went to France to save an England which consisted almost entirely of Shakespeare's plays and Miss Isabel Pole in a green dress walking in a square....

He had gone through the whole show, friendship, European war, death, had won promotion, was still under thirty and was bound to survive. He was right there. The last shells missed him. He watched them explode with indifference....

He looked at people outside: happy they seemed,  collecting in the middle of the street, shouting, laughing, squabbling over nothing. But he could not taste, he could not feel. In the teashop among the tables and the chattering waiters the appalling fear came over him - he could not feel. he could reason; he could read, Dante for example, quite easily ('Septimus, do put down your book, ' said Rezia, gently shutting The Inferno), he could add up his bill; his brain was perfect; it must be the fault of the world then - that he could not feel.

Woolf begins Mrs Dalloway in 1922 (it's set in 1923), the annus mirabilis of 20th century literature, the year in which Joyce publishes Ulysses, and Eliot The Waste Land. Reading the pages in Mrs Dalloway in which Septimus goes to war with Shakespeare (Antony and Cleopatra, which he picks up again, post-war, 'That boy's business of the intoxication of language - Antony and Cleopatra - had shrivelled utterly') and returns with The Inferno. The war has left him in hell without a Virgil to lead him out; he sees the ghost of Evans, his commanding officer, everywhere and


In the streets, vans roared past him; brutality blared out on placards; men were trapped in mines; women burnt alive; and once a maimed file of lunatics being exercised or displayed for the diversion of the populace (who laughed aloud) ambled and nodded and grinned past him, the Tottenham Court Road, each half apologetically, yet triumphantly, inflicting his hopeless woe.

Eliot, of course, also uses Dante and Shakespeare's Antony and Cleopatra in The Waste Land - but, since Wendy's next deep dive into the sacred texts of modernism begins on 21st October with a two week salon on The Waste Land, it will wait for another time.

[the Wendy Meakin Literary Salon: The Waste Land is 21st and 28th October, 7pm to 9pm at The Club at Cafe Royal, price £30 for both sessions, or £41 to include a copy of TS Eliot Selected poems. If anyone is interested in joining me there, email me on mrstrefusis@gmail.com]

Upon reading this I have immediately ordered Mrs D from the Brisbane library. Thanks!