SUSAN HILL AT THE BOOKS THAT BUILT ME. 8TH DECEMBER 2015 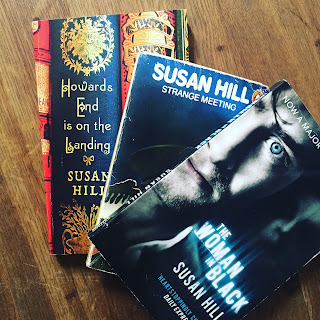 "Books help to form us." says Susan Hill in her memoir, Howards End is on the Landing, "If you cut me open, will you find volume after volume, page after page, the contents of every one I have ever read, somehow transmuted and transformed into me? Alice in Wonderland, The Magic Faraway Tree. The Hound of the Baskervilles, The Book of Job. Bleak House. Wuthering Heights. The Complete Poems of W.H.Auden. The Tale of Mr Tod. Howards End. What a strange person I must be. But if the books I have read have helped to form me, then probably nobody else who ever lived has read exactly the same books, all the same books and only the same books, as me. So just as my genes and the soul within me make me uniquely me, so I am the unique sum of the books I have read. I am my literary DNA".


Howards End is on the Landing is a marvellous memoir, not only for the insights it gives into Hill's 'literary DNA', but also for the people she's met: E.M Forster is a 'small man with thinning hair and a melancholy moustache' who drops a book on her foot in the London Library, there's kind Sacheverall Sitwell and his terrifying sister, Edith, with her extraordinary eyes, 'huge, heavily lidded, mesmerising, half-closed like the eyes of an apparently sleeping but terribly watchful crocodile' and asks a young Hill which poetry she has by heart. There's T.S Eliot, at a party, Elizabeth Jane Howard, W.H.Auden, Roald Dahl, Benjamin Britten, Ian Fleming, Iris Murdoch - I can't think of a more beguiling and breathtaking list of cultural greats. Only V.S Naipaul sounds less than a treat: they meet at Radio 4, Susan Hill is to interview him on Bookshelf.


"When he comes up to me and takes my hand in his silken ones, he bows.'I am most honoured to meet...' a pause. Then '...the wife of the distinguished Shakespeare scholar Stanley Wells.'

Typically generous, Hill goes on to say 'there is surely no novelist writing since the 1950's who is greater than Naipaul'.

Re-reading Howards End is on the Landing, those words - 'I am the unique sum of the books I have read' - spring out at me. I first read it in 2009, and somehow, the fascinating idea of a writer's literary DNA must have tucked itself away into my unconscious. When I conceived The Books That Built Me, I thought it was the exchange between Elizabeth Jane Howard and Martin Amis that had inspired the salon's conceit, but perhaps my preoccupation with exploring the relationship between the books an author reads and the books they write owes a greater debt to Susan Hill: Howards End is on the Landing grafted itself into my own literary DNA, and the result is The Books That Built Me.

I love her work - I'm the King of the Castle, Strange Meeting and The Woman in Black are a masterclass in characterisation, deft plotting and a vivid sense of place underpinned by supple, lucid, evocative prose. I loved going through her 'Final Forty' list of books at the back of Howards End is on the Landing and seeing so many of the books I also love there. And I've loved re-reading the five books she has chosen for her Books That Built Me, and tracing a line back into her writing.

So, on 8th December, at the Club at Cafe Royal, I will touch the hand that's touched the hand of E.M Forster and T.S Eliot, and have the great privilege of talking to an author I admire enormously. Do join me, Tatler, Champagne Bollinger and Prestat chocolate for The Books That Built Susan Hill.

Buy
Howards End is on the Landing: A year of reading from home

I admire Susan Hill as a writer and have read nearly everything she's written. Howard's End was a particular pleasure. Lucky you to get to meet her.