"This is the saddest story I have ever heard."

The opening of Ford Madox Ford's The Good Soldier, is up there with "It was the best of times, it was the worst of times" and "It was a bright, cold day in April and the clocks were striking thirteen" as one of the most memorable first lines in fiction. It's also one of the most misleading; you assume it's a statement of fact - but you're no further than the end of the first chapter before you begin to question its trustworthiness. Dowell, the book's narrator, is not simply telling the story, he is the story - so from whom has he 'heard' it? From that moment, the reader begins to suspect that Dowell may be at best a compromised narrator, and at the least, unreliable, albeit in a sense that he doesn't always 'know how to put this thing down.'


On the surface, the story seems not to be complicated: two well-born couples, one English, the Ashburnhams, one American - John Dowell and his wife Florence, meet at a German spa town, where they become 'a four-square coterie' and spend a companionable 'nine years of uninterrupted tranquility' together until it's discovered that Florence Dowell has been having an affair with Captain Ashburnham, the 'Good Soldier' of the story. But Ford's great skill lies not in exploring the nuances of a conventional love-triangle (love quadrangle?), but in unpicking, and gradually revealing and concealing and revealing again in Dowell's uncertain, bumbling impressions, confessions and revelations, the empty, desolate heart of both marriages. It's a story in which there are neither heroes nor villains, only delusions, self-deceptions and tragic, shameful concealed truths. The Ashburnhams - 'quite good people' - haven't said a word to each other in private for years, yet appear to be a model couple - Florence Dowell's ill-health for which her husband has worked to create a 'shock-proof world' is nothing more than an elaborate charade to conceal an illicit relationship pre-marriage. Yet their spouses aren't deceived innocents, but utterly complicit. It is the saddest story.
So where are we with the 'ever heard'? In as much as Florence has deceived Dowell, he has conspired with the deception. Leonora Ashburnham goes out of her way to constantly uncover her husband's philanderings and debts whilst rigorously maintaining the front of being 'quite good people' and behaving as quite good people might be expected to. Dowell is different - he refuses to believe the evidence in front of him, he is immune to his wife's aunt's dark warnings and seems almost able to ignore the truth of Florence's past when a perfect stranger blurts it out to him. So he has had to be told, he has had to listen to his own story, and that distancing 'that I have ever heard' underscores the tragedy, it is something he has heard, it is hearsay, it may not be true?
Julian Barnes calls Madox Ford 'a proper reader's writer' - I love him because I enjoy his ingenious manipulation of the reader - he's not considered a modernist, and yet, on the evidence of The Good Soldier, I challenge anyone not to garland him with as many laurels for technical brilliance as Woolf or Joyce. Susan Hill with whom I'll discuss the book tomorrow at her Books That Built Me calls it 'the perfect novel form'.  I keep coming back to The Good Soldier and every time I'm blown away by Ford's extraordinary control over his novel - it is perfection, and I always wonder, 'just how does he do it'.
I managed to read The Good Soldier in some marvellous places - Cecconis, where the treat of a Negroni and a few chapters of The Good Soldier late one afternoon ( scandalously early for drinking cocktails) managed to restore my equilibrium after a shoddy day - and Wilton's, which is such a fixture of The London dining scene one can quite imagine the Ashburnhams dining there. It is heaven - here below is what they say about themselves. 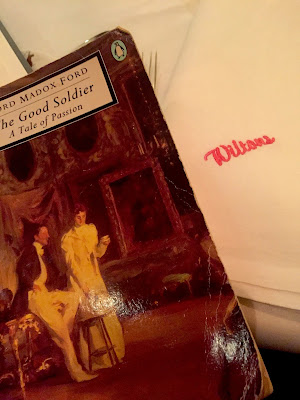 Its current Jermyn Street location, in the heart of St James's, is ideally suited to its clientele, which includes members of the government, businesspersons, film stars and British aristocracy. Service is discreet, professional and welcoming."
I tried to look like a member of the aristocracy but suspect I only managed 'businessperson'. Anyway, I drank an excellent glass of champagne and finished the Good Soldier as my good friend Wendy arrived to much feting and slaughtering of fatted calf by Wilton's  - they look after their regulars very well.
Posted by Helen Brocklebank at Sunday, December 06, 2015