TO THE LIGHTHOUSE, VIRGINIA WOOLF 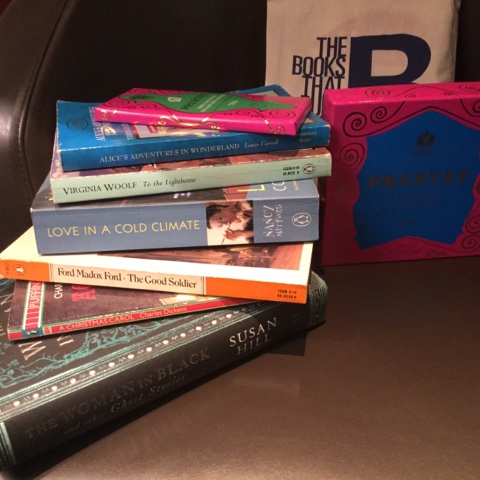 I've re-read To The Lighthouse twice this year - first for Deborah Moggach's Books That Built Me, and then again for Susan Hill's.

It's Woolf's crowning achievement, I think. As a devotee of Mrs Dalloway, it has taken me a while to see that, but it is true.  Woolf herself wrote to Vita Sackville West "the dinner party the best thing I ever wrote: the one thing that I think justifies my faults as a writer...". She also sent her a copy inscribed, 'in my opinion the best novel I have ever written'. Inside Vita found all the pages blank.

I fell across a letter of hers to Roger Fry earlier today, written towards the end of May, 1927, a few weeks after its publication -

"My Dear Roger,
[...] I meant nothing by The Lighthouse. One has to have a central line down the middle of the book to hold the design together. I saw that all sorts of feelings would accrue to this, but I refused to think them out, and trusted that people would make it the deposit for their own emotions - which they have done, one thinking it means one thing another another. I can't manage Symbolism except in this vague, generalised way. Whether it's right or wrong I don't know, but directly I'm told what a thing means, it becomes hateful to me. [...]
Yr
V.W"

I promise I will write in more detail about Susan Hill's Books That Built Me before this year is much older, but one of the things she and I discussed in relation to Woolf, and particularly To The Lighthouse, is that an author must learn to trust the reader, to not feel compelled to spell things out, to take them from A to B to C, but to understand that the reader is clever enough to feel their own way, to pick up the trail of clues - to 'make it the deposit for their own emotions'.

I always remember something I read about VW. She was lying prostrate on a couch with her arm draped over her eyes and said, "I'll never write again." Any writer can empathize.