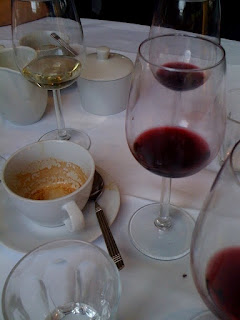 The art of Bunburying, when perfected, can enable a person to follow their whims without fear of backlash from meddlesome friends and precarious family obligations.

My taxi driver sensibly dropped me off on Porchester Gardens, right outside the private entrance to Le Café Anglais. If I'd had my wits about me, I'd have stepped out of the cab, and into Café Anglais’ private lift and found myself cocooned in elegant luxury in a trice. Too intent on looking glamorous in an enormous pair of Prada sunglasses, I tottered straight past the lift, and found myself stranded in the middle of Whiteley's shopping centre.

It's slightly counter-intuitive to put a very smart restaurant at the top of a rather less smart mall, and it's greatly to the credit of Le Café Anglais that it manages to overcome the experience of actually getting there. Having finally stumbled upon a public lift, I found myself alone with a Mohammed Al Fayed lookeylikey, who pressed me lasciviously against the lift's buttons, breathed hotly on me, insisting I was 'beeyootifooll' and that we must go for a drink together immediately. It's at times like these I realise the extraordinary disadvantages of being middle-middle class: DidI hit him with my capacious handbag? Did I cry 'Unhand me sir' in a ringing tone, pressing the alarm? No, I did not. Appalled and disconcerted, yet unwilling to appear impolite, I merely squeaked, 'Sweet of you, but I'm meeting friends' and scuttled out of the lift in heart-pounding relief as the doors opened not a second too soon.

I still couldn't find Le Café Anglais. I asked someone in Yo Sushi! who sent me to Cafe Nero. Had I not still been wearing my dark glasses, I daresay I would have arrived at the restaurant an awful lot sooner. When I finally got there, I had to spend several minutes outside, trying to recompose myself, partly to shake off the sweaty horror of my enthusiastic lift companion, but mostly to try and conquer my embarrassment at my own navigational incompetence.

Only a fool - me - would think Le Café Anglais difficult to get to. The upside of the story is that it's such a bower of bliss, I could have walked barefoot from Acton along the Westway, and it would have been worth the pain.

The interior is astonishingly beautiful - all art-deco detailing, floor to ceiling windows, and double-height ceiling. It has a wonderful understated opulence about it, cleverly excising all trace of the MacDonalds that once occupied the same space.

But it wasn’t to stare admiringly at its design or drool at the enormous menu that I was there: co-founder Charlie McVeigh had invited a cabal of twitterers to a lunch, with nothing more taxing on our agenda than a hedonistic afternoon of delicious food, wine far better than my ignorant palate deserves, and vast amounts of gossip – real life twittering, perhaps.

Proper restaurant critics have reviewed the delights on offer far better than I ever could– you may read them here and here – all I shall say is that the menu is cleverly composed of all the things you most want to eat in the world, and some things that you might hesitate to try but are works of staggering genius – like the parmesan custard with anchovy toast, which I’d rather feared might taste like a pair of superannuated socks, but is such heaven I’m salivating as I write, wondering when I can contrive to go back so I may eat it again.

An afternoon like this is my version of Wilde’s Bunburying – a miniature holiday, carefree and without a to-do list or pressing agenda – the London equivalent of a lazy day on the beach with a not-very-improving novel, and with all the transgressive appeal of stolen time, though I hasten to add, in case anyone from work is reading, I have a properly completed holiday form for anyone who'd like to see it.
And really, despite the fact that the lunch gave onto drinks and then dinner, before ending shortly before midnight, it was a very restorative Bunbury indeed.

NB : there are many beautiful pictures of Cafe Anglais on the website, but I took the one above as we were coming to the end of lunch : a reminder of an affable and convivial afternoon

I used to have a very accomplished Bunbury companion in London. She's since turned t-total, and is now completely useless at the activity.

Sounds delightful. I actually grew up on Bunbury Road, so I like to think that this activity is in my DNA.

I too missed the express lift and muddled through the shopping centre in my overly high heels...I agree, it was worth the waddle, xv.

I must go there if I can find it !
The lift romeo sounds quite funny, sorry for laughing but I wonder do they ever get anyone to go for a drink with them. Slimy little toads that they are.

The lift story is divine- I read that you are a Mitford lover and I think the world is divided into Linda's and Fanny's. In many ways I am a Linda but manners wise I am a total Fanny (if that doesn't sound too ridiculous!). Linda would have swatted him with her handbag- Fanny would probably have invited him for tea if the lift ride had gone on any longer. Sounds like you handled it terribly well.

Is it too too cruel that I have been known to tell people I am seeing my friend x or y Bunbury if I don't want to do something? Haven't done it for years- it used to be quite fun though!

Jealous. Fabulous. Delightful!
It sounds like a good old fashioned English get together from the days of Waugh or Maugham. I'm sure the banter was very intellectual given the company, the food sounds divine and the atmosphere seems like the perfect setting to just forget about the hours ticking past (as they did) for a wonderful day of chat. Only in England. Things like that don't happen Stateside. Well, not that I'm aware of. I would have loved to have been a fly on the wall of your "salon" and listened to a human Twittering festival. Luscious. I'm sure you were dressed to the nines, and from the looks of your table, it seems like everyone left full, tipsy and happy. Next time have someone bring a laptop with wifi and include us! Awww Mrs. T you do live the life. As you should! Oh and your little dude in the lift....he sounded hot! Look, you're a sexy blonde, what can you expect? Just be grateful he didn't hit the emergency stop button in the elevator. Then there would have been trouble. Tea for two, possibly? I'm sure he would have happily shared his "scones" with you. xoxoxoxo lovely and very envious posting.

Your unplanned foray into the dreaded Whiteleys gave me a horrible sense of deja vu - memories of bunnylike confusion as I stared at the "Gentleman's Establishment" on Shoreditch High St back in May having forgotten my map, pieces of paper with useful addresses, brain etc. and thus was horribly late.
The lunch-dinner-midnight feast sounds fab. Next time I am in London I demand a rematch.

Still reeling from lift encounter tale. Vile. I have a nice line in icy unapproachable stares and old lady handbag walloping skills which I am happy to pass on either in seminar form or private lesson:)
xo
PS wv 'warrid' - somewhere between worried and harridan. This is actually me, most days

Oh darling it sounds absolutely delightful. Must check it out.

I think Oscar would be proud of such a well-executed (and exquisitely written) Bunbury, Mrs T.

Funny to think of you being just down the road from where I live.
Laughed at your lift experience. I'm always too scared to ignore men like that as I always think I might make a situation worse.
Cafe Anglais sounds lovely.

Oh good I'm glad it is delightful, I've been meaning to go for ages. I do have to confess to almost eating there when it was McDonalds to stave off a hangover but went into Cafe Rouge instead - not sure much better but the croque monsieur did the trick.

I adore the image of you tottering in your over-sized Prada sunglasses. I agree with Rose, this post is Mitford worthy. Bravo!

Those Prada Sunglasses are perfect. They look great.