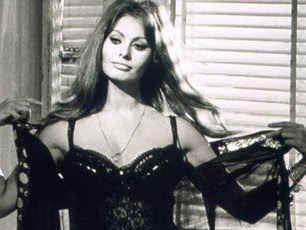 The on-screen chemistry between Sophie Loren and Marcello Mastroianni is undeniable, and it's a terrific moment in a highly watchable film.
In 1994, for the less successful Prêt-à-Porter, Robert Altman brought the two co-stars back together to reprise the famous scene. I was looking for Ieri, Oggi, Domani on You Tube, and was delighted to fall across this rather clever splice of the two films.
Thirty years after Yesterday, Today and Tomorrow, Loren, at 60, and Mastroianni, 70, still set the screen smouldering: I particularly like the wry humour of the scene's end.
Posted by Helen Brocklebank at Friday, August 07, 2009

On the far right hand side of the youTube screen for your clip, there are two little boxes, "url" and "embed". Copy and paste the "embed" code into your blogger post box, wherever you want to place it. If you then hit "preview" you should be able to see your chosen video in the post.

I absolutely agree with you on the film's seductiveness. Those Italians are such sex pots. Even in old age.

What is so amazing is how that woman has kept her seductive figure. If you chopped her head off, you wouldn't be able to tell which body was from which movie. It's really interesting how women's figures have changed in terms of sexiness. Ms. Loren would be considered by some to be out of shape. But looking at her in the first film, geez, she just looked like a woman should. Shame we have all of this modern day crap we have to live up to. I know that wasn't the point of the clip Mrs. T, but it really made me take notice. Yes, the film is adorable and the two of them are sweet. They don't make cinema like they used to. Bella!!

Very cute ending...Wasn't she the most fabulous looking woman? (and still is) xv

Fabulous ! What a beauty Sophia was and still is a lovely piece of seductive cinema.
Makes me want to go out and buy some nice underwear and seduce ( without giggling too much ) after 20 years that can be fun. I have to tell you I really enjoy your blogs

I'm a fan of Loren and have not heard of 'Yesterday, Today and Tomorrow' before, thanks for sharing, I shall search it out now. Loved the clip.

I love 'Houseboat'. I learnt how to eat pizza from Sophia in that film.

You know Sophia Loren should inspire us all, she looks great and she always has and she has always eaten. Most men I know adore her- although I suspect they wouldn't have a clue what to do if they actually met her!

Over the weekend, I watched Houseboat with Loren and Cary Grant. Her beauty was simply other-worldly.

Positively enchanting! I grinned through the entire clip. Loren, of course, is captivating, but the way Mastroianni sits like an excited child hunched up on the bed howling like a wolf at the moon is just wonderful.