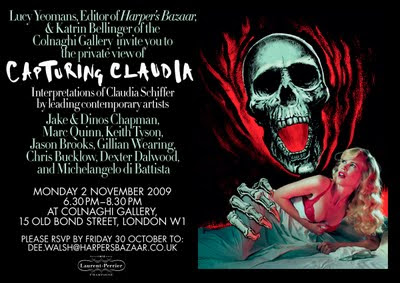 The November issue of Harper's Bazaar featured a selection of exquisite portraits of Claudia Schiffer, created by some of the great and the good of contemporary art. In a unique and wonderfully ambitious venture, Bazaar commissioned Jake and Dinos Chapman, Gillian Wearing, Jason Brooks, Marc Quinn, Dexter Dalwood, Chris Bucklow, and Keith Tyson to offer their own interpretation of this platonic ideal of female beauty.
The pictures looked pretty extraordinary on the pages of the magazine, but begged to be hung and displayed properly in a gallery. So this Monday, Bazaar hosted a private view of 'Capturing Claudia' at the Colnaghi Gallery, attended by the muse herself, the artists who represented her according to their own particular vibe and vision, and vast amounts of wildly glamorous people from the art and fashion worlds, all of whom looked vaguely famous but who I was too dim and uncool to recognise.
Helpfully primed by all the pictures of her staring back at me from the walls, I did manage to recognise Claudia Schiffer. She looks so robust and statuesque in fashion shoots, yet she's rather fragile looking in real life, albeit very tall in an etiolated kind of way, like a plant that has been nurtured in the dark and grown lanky in search of a light source.
I'm afraid that when 'Capturing Claudia' myself, I used my iPhone, hardly the world's best camera, hence the rubbish blurry quality of this shot of her in front of Marc Quinn's flower portrait. 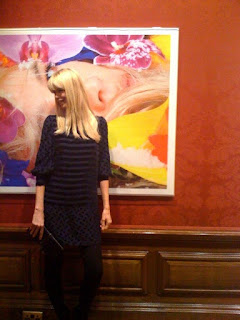 Here she is, slightly closer up. Not as close up as the Marc Quinn picture, which, though idealised in its composition, is un-retouched, and bears witness to her flawless skin. God, how few of us at thirty-nine could stand being scrutinised in close-up and displayed at such magnification?

Jake and Dinos Chapman's Hammer-Horror-meets-Hitchcock series is easily the least disturbing of anything Chapman Bros have ever produced, but no less stunning for that.

Jason Brooks' double-portrait appears at first to be the most conventional of the seven pieces, yet this starkly beautiful pencil drawing of Claudia's un-made-up face, in all its unflinching, photo-realist simplicity, relies on nothing other than the precision and skill of the artist for its power. It's a bold contradiction of the heavily re-touched, idealised and perfected images of celebrities we're used to. 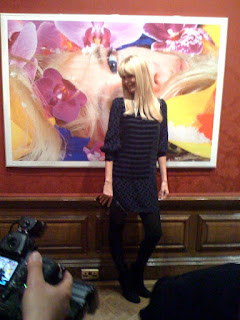 I didn't get to take any iPhotos of Claudia in front of Keith Tyson's enormous seven-headed portrait. I was standing in front of it, muttering like a bag lady about how little I understood why he'd represented her as a beautiful Hydra surrounding what looked like a golf-course, when I realised I was standing next to the artist himself. Gutlessly, I turned and fled, only to be pursued by a sense of l'esprit de l'escalier: turning over in my head a dozen conversations in which I had the courage to ask him about his thinking behind the portrait, without the attendant anxiety about appearing stupid or uncool.
There is something about contemporary art that always makes me feel deeply, deeply unhip, like a Friend of the Royal Academy that's accidentally wandered into the Turner Prize. I won't say I didn't feel overawed in the company of art made flesh, and flesh made art and I'm wise enough to leave the art criticism to those that can fashion a coherent opinion but, by 'eck, they were lovely pictures, and that Claudia Schiffer's right pretty.
PS: I've just been told that if you're quick, you can pop into the gallery and see Capturing Claudia for yourself
Colnaghi Gallery
15 Old Bond Street
W1
(opposite Gucci)
Free Admission
10am - 6pm
But be quick - it's only on until this Friday, 6th November.
Posted by Helen Brocklebank at Wednesday, November 04, 2009

I studied art & art history at university and I struggle to understand contemporary art. I'm more of a Degas or Toulouse-Lautrec girl.

Having said that I am so out of the loop and haven't been to an exhibition in a long long time :(.

The muttering bag-lady has left me in hysterics... Very Mrs Trefusis! You should have asked him outright, channeled the awkward energy into outright attack. But this cannot mask my uber-jealousy at not being there. Bother. X

She does look pretty darn good for 39, if the 'unmade up' sketch is anything to go by.

My views on contemporary art are influenced by my sister, who teaches art A level and maintains that in order to get a good grade, students must try to include something shocking, like a horse's penis, somewhere in their oeuvre....

Contemporary art I struggle with too. Sometimes I'm not even sure it's art... But this looks fun and a good night out!

Modern art often seems just one big Boo-huu to me with a lot of inflated people standing around talking rubbish. But from time to time I meet a piece that grabs me and makes me fall in love. So perhaps modern art is also about the unexpected...

as always a lovely post- and lovely bec you are so self-effacing. so not true- you know enough about contemporary art and all the other yummy aesthetic things in life. thanks for sharing claudia's photos, even if from an iPhone, heck, it's about as close to her as i will ever get. x

No I find a lot of modern art leaves me cold as I dont understand it, saying that I took the kids to the Tate Gallery on the Albert Dock, we viewed the Niki de Saint Phalle exhibition, and we had the good fortune to have a very stoned scouse guide who's voice was extremely soporific. We really enjoyed it, once we knew what it was all about. Claudia Schiffer looks stunning as always I had previously seen the sketch of her in a magazine.

Mrs T I didn't know where to comment but I love the little bit about Diorella in the top right hand corner (which would be very good on Claudia no?). I love Eau Savage too- if I could find a man to marry and he smelt of that- well let the good times roll.

She is right pretty, isn't she? I remember seeing her in a baby boutique in Notting Hill once - all fragile legs and leather jacket. Lovely post. xx

I remember seeing her and her husband in West Hampstead once.
All I noticed at first was that the cleanest couple I had ever seen were walking down the street.
That's what attracted me, the sheer shiny glossy spanking new box-fresh cleanliness of them.They didn't look human.

Is this the same Claudia Schiffer who bankrupted her 24 year old chef for daring to use a quote on her cookbook without obtaining permission from the model? Nasty. I've never bought a Schiffer endorsed product since.