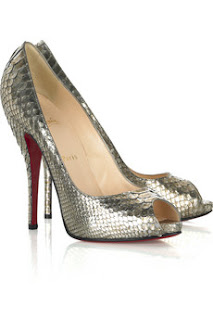 What is it that's so alluring about a high-heeled shoe? I'm particularly drawn to those with viciously pointed toes, and a sharp heel, so much so that I can empathise enormously with the step-sisters in Grimm's variant of Cinderella, Aschenputtel. It's a rather harsher, more visceral version of the tale than Perrault's, or Disney's, but in all the stories, the Prince identifies his future bride by means of a shoe (because, of course, just remembering her face would be too much of an effort, right?). Anyway, in Grimms story, when the Prince announces that whoever fits the 'small and slender' golden slipper will be his bride...

...Then the two sisters were very glad, because they had pretty feet. The eldest went to her room to try on the shoe, and her mother stood by. But she could not get her great toe into it, for the shoe was too small; then her mother handed her a knife, and said, “Cut the toe off, for when you are queen you will never have to go on foot.” So the girl cut her toe off, squeezed her foot into the shoe, concealed the pain, and went down to the prince.

Whenever I read Aschenputtel, I'm reminded that it doesn't take a handsome prince to make a woman go through this kind of pain these days - fashion alone will do it: seemingly we're all penitents on a fashion pilgrimage, offering up our suffering as sacrifice. I've spent many happy minutes playing hookey in the fashion cupboard at work, trying on the dozens of glorious shoes that come in to be photographed for the magazine, each more exquisitely agonising than the last. I remember a pair of cranberry coloured glacé kid Louboutins which were so high they immediately hurt my knees, so heaven only knows what they'd be like after an hour, and a mouthwatering pair of Yves Saint Laurent Tribtoo shoes with a skyscraper of a platform and a needle heel that just screamed 'broken ankle'. My own shoe cupboard is full of beautiful high heels - and there are a fair few that could really do with me amputating a toe or slicing off a heel to make them anything like wearable.
There was a time when I didn't care about the fact most of my shoes made me feel as if I were walking on sharp swords like the Little Mermaid. The loveliness of them far outweighed their purpose and made walking to the end of the office without wincing seem like an indulgence. Part of me still feels that way, and now I've put Party Feet in every pair I own, and have reined in some of my ambition when it comes to heel height, I still like to sit and admire my feet in a nice pair of Ferragamos or Louboutins or even in the petrol blue Kurt Geiger shoeboots I'm wearing today.

However, the weather and the recession have instigated a recent change in Trefusis footwear policy: when I started this blog, it read 'Mrs Trefusis Takes a Taxi...because she eschews sensible shoes'. Well, um, what can I say - for the sake of veracity, I've had to remove that promise. I no longer eschew the sensible or the comfortable. Partly it's because taxis have become something of a luxury rather than a necessity - and let me tell you, I'm absolutely delighted to have discovered the bus; nearly as good as a taxi in Central London and only £1.20 a journey with an Oyster Card. Really, too marvellous. But mostly it's because that when it's wet or snowy or icy underfoot, heels just don't cut it. It's not simply that I don't want to wreck something that costs more money than I could ever admit to Mr Trefusis, it's that I'd rather remain on terra firma. I'm afraid I bought UGGS. God knows, I swore I never would, but I can't tell you the loveliness of always having warm and cosy feet, being able to walk fast - especially if I can see the right bus is coming - and of having toes and heels and insteps that no longer beg for mercy. I do call them Ugh's, because no one can deny they're works of infernal hideousness, but I'm definitely prepared to sacrifice style for comfort - at least out of doors.

But perhaps I haven't strayed that far from the Cinderella myth: according to Wikipedia, in Perrault's version, Cinderella wore fur boots - 'pantoufle en vair' - but when the story was translated from the French, vair was mistaken for verre (glass). So Cinderella was, at least in one account, a sensible girl too - and right now, in snow-bound Britain, a fur boot trumps a glass slipper, prince or no prince.
Posted by Helen Brocklebank at Sunday, January 10, 2010

that's fascinating they were fur boots before translation- how funny! I have no will power when it comes to shoes but equally I wouldn't say I was a wonderful heel wearer. I now carry some actual ballet shoes in black for after the party and find knowing I will get relief from my heels helps me to not take them off too soon.

I still haven't got any Uggs- not because I don't think they would be great but it seems like so much money when I could have some prettier shoes I will far less... so this last week I have been wearing my kill bill trainers which look unsuitable and strange with everything. I need some black uggs for the new sub zero London. Sigh.

I know nothing about shoes which is strange coming from someone whose family name used to be a High Street name in the shoe world (crap shoes though!), mainly as living in deepest France on a farm, wellies were de rigeur most of the year or Aigle hiking boots, and now I live in Brussels where the cobbles kill shoes in five minutes and apart from that I am 5'11" so cannot justify tottering around in mega heels.
What I do remember a few years ago, and this takes be back in a roundabout way to your post, was the fashion in France (and perhaps England) of high heels that had transparent plasticy stuff replacing the leather ... seeing compressed, sweaty toes in those shoes used to make me feel quite faint!
WV Calgatra - good name for new make of shoe?

I am trying to conjure a mental image of you in Uggs. May need photogrpahic evidence!

Hello Mrs Trefusis,
I totally understand the attraction of having sheepskin-clad feet at the moment and skidding around in heels does seem a bit ridiculous, but I'm sorry I still think Uggs are the devil's boot (enough room in there for a cloven hoof!?). Think I'll stick to two pairs of socks and my Clark's Originals.

Being a dog owner in Ireland, it has taken years to come to terms with my thermal hiking boots...not to mention the rest of the less than fabulous thermal and waterproof attire....

I'm sitting here in my Ughs (love that, btw) reading this and don't even have the excuse of snow. Since moving to SoCal I have abandoned glamorous footwear in favour of flipflops/Ughs because there is simply no point in wearing anything else. Come to think of it that might actually be the root cause of my general malaise..

One advantage of heels never mentioned is that if you are going ever so slightly deaf they take you significantly nearer lots of people's mouths = hear better.

I did exactly the same. I am known for high-heel addiction so this was an Everest distance to go. I despise the look of them, I frown on the lack of imagination that characterises the identikit stringy teenager look of them. But I love them still. I like to run in them, and I feel as bouncy as the cuddly Aussie shearling that donated its coat for such a perverse fashion. I have matching ear-muffs. UGH, the beast that it is, has bitten me.

I was lucky enough to work for a sensational Manhattan girl recently and she taught me their way: the highest heels you can bear, with a cool or pretty pair of flats (ballerinas/low Converse/MBTs) for running around in.

You need a large enough handbag to hide the comfy ones in when you go into the meeting and enough chutzpah to do a changeover in the street sometimes but it means you can have the lovely shoes and the happy feet.

What an absolutely fabulous post.
And those shoes, I'd cut my toe off for those shoes.
WEM xx

What is it about shoes? I spent the weekend clearing out daughter's room (she being away on gap year) and found a veritable shoe mountain, some of which I'd never set my eyes on. I can't really complain as my wardrobe is full of shoes too high to wear and too expensive to ever even whisper the price of to anyone bearing the title of Mr in this house.

So delighted you are keeping to your New Year's promise of more frequent blogging, Mrs T. You lead by example.

My uggs have nearly murdered me today back high heels in the snow cant be anymore dangerous .. yet not as warm :(

Since I've never grasped the whole high heels thing, I must have had the sort of eighties every-penny-counts childhood where paying for something that actually made you less able to walk was tantamount for voting for Mrs Thatcher.

Handbags, now. The amount of money I can waste on handbags that look exactly the same as the last one just because they have a slightly different arrangement of pockets and attachmentty things...

I've been wearing my Emu Uggs. Half the price of the Australia brand ones and still keep my feet toasty. I have to admit they're by no mean glamourous though :(.

I've done so much traipsing about in the snow that the water proofing I gave them has worn off and given way to soggy feet so I am now desperately trying to find anywhere locally that stocks wellies, which is apparently nowhere!

Oddly one of the nicknames I call my little lady Elodie is Pantoufle, have no idea why though!

to this day i thank you (profusely) for introducing me to 'party feet' all those years ago- it changed my life (at parties, at least). i have a lot of high heels staring at me- i get lazy about wearing them. and as you know they were impossible to wear in the San Pietrini (how DO those Roman girls do it?). a beautifully written post, i love the Grimm's brothers, when i read that story as a child, it never occurred to me how sexist it is! xo

I had always understood that the mistranslation was in fact from 'vert' or green.

I much prefer your version though, as it makes my ugh-encased fit flop feet feel slightly less in betrayal of all things dear to me (namely louboutin, nicholas kirkwood, brian atwood) and more like those of a fairy princess.

Thank you Mrs Trefusis for yet another nugget of fabulous fashion wisdom.