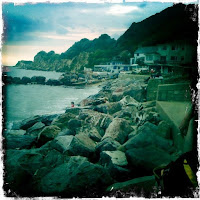 'I've turned into my parents, haven't I?' I said to Mr Trefusis halfway through our holiday, as I tuned the car radio into Radio Four and suggested we might stop to have a look at the view. I found myself parroting phrases like 'Just in case' and 'You can't trust the forecast' as I packed cagoules and cardigans, sunhats and suncream, and insisted on the children getting out to the beach even when it was far from warm for 'a bit of a blow'. Worse still, every time anyone yawned, I said 'Tires you out, all this sea air'. It's true: it does.

The piéce de résistance of my search for early eighties authenticity was dragging the tirelessly good-humoured Belgian Waffling down to the beach in a howling gale so we could enact the time-honoured British Tea Ceremony, Holiday Edition. I think we managed one cup each from the outsize thermos and a scone, crunchy with wind-whipped sand, before the charm wore off, but it evoked the requisite nostalgie de la boue. The only way we could possibly have trumped the experience would have been to drink the tea in the car whilst watching the sea and the lashing rain. But I think you have to be in Filey for it to work properly. I spent several summers as a child on the North East coast, and apparently I used to go swimming quite happily - God knows how I avoided hypothermia.

Even Mr Trefusis - who, like the Bromsgroves, came from a family that went Abroad for their holidays - fell for the charms of lovely Ventnor, even if he spent most of it pretending to be Alain Delon, hanging out in a fishing village somewhere on the Cote D'Azur. 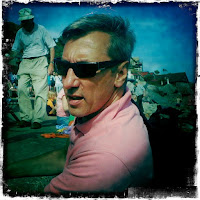 Steephill Cove, our nearest beach, is the Petit Trianon of the British seaside. Tiny as it is, and accessible only by foot or by boat, it manages to boast not only the kind of rockpool action beloved of the Cappuccino Classes but also two of the best fish restaurants on the island, and café-cum-shop selling a mean espresso, Minghella's ices and cool retro sweets like Starbars, Fry's Mint Cream and Sherbet dibdabs. I muttered something about it being the new Dorset, and took Trefusis Minor and The TT down to the shoreline to build sandcastles and swim in the sea, leaving Mr Trefusis to 'watch' us from his favourite table, whilst simultaneously reading one of those 'The Girl with ..' novels and taking surreptitious peeks around his sun specs at the pretty girls coming in and out of the café. 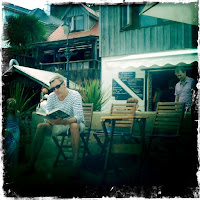 Yet it wasn't all about trying to recapture the holidays of my childhood - as The Waffle's charming brother said as he took us all out on a boat, it's about making new memories too, even if some of them are inspired by old ones. 'I'll never forget the first time my dad took me fishing.' he said, as the mackerel lines were passed around. Fishing for mackerel off the coast of the Isle of Wight is infinitely more satisfying than catching crabs - the little blighters jump with lemming-like enthusiasm onto your hooks, and even The Tiniest Trefusis caught three, first time she dropped her line over the side. Trefusis Minor was less successful - he's more likely to remember his valiant attempts not to be seasick. We caught twenty-five mackerel in about ten minutes - and took them back to the lovely holiday house and baked some en papillotte with cider and onions, and froze the rest to take home after the holidays. 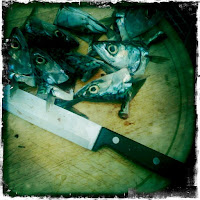 This morning, before leaving for the office, I made Mr Trefusis some mackerel pâté with the last of them (not as goddessy as it sounds - it's an insanely easy recipe, involving nothing more trying than mashing the ingredients together with a fork). I took the cooked fish off the bone by hand and as I sat on the bus on my way to work, I couldn't help noticing how appallingly whiffy my fingers still were, despite washing them several times. Ick.
Mackerel-scented fingers are too prosaic as a memory trigger and can hardly compete with Proust's madelines for romance, but all the same, I spent the whole journey wrapped in the comforting memories of a blissful fortnight spent in wonderful company, rediscovering simple pleasures.
Posted by Helen Brocklebank at Tuesday, August 24, 2010

Email ThisBlogThis!Share to TwitterShare to FacebookShare to Pinterest
Labels: Belgian Waffling, great works of literature get you into trouble, isle of wight, Mr Trefusis, The Tiniest Trefusis, trefusis minor

oh, i love it so. such a beautiful picture you have painted. as i lay in bed today at home w a sprained neck muscle, it's just the thing i want to read. lovely, lovely, lovely. welcome back, Mrs T. x shayma

Hang on, my brother claimed my dad took him fishing???? I remember him forcing him to work for 6 months on a trawler in Ullapool. Does that count?

Endlessly neurotic and difficult I think you mean, but thank you, it was so so lovely to be on hols with you.

What a bliss (complete with mackerel fingers...) - I spent some time in Ventnor few years ago, and nobody believed me I came there from Austria for holiday again and again... I so would want to go back there but I can't convince my s.o.

Sounds just like a proper holiday, may I say Mr T has a look of Cary Grant in that photo.
I hate fish smelling fingers, that is definitely the mark of true love to attempt such a pate xx

Lovely. So sorry (for you) that you had to come back. Talk about vacances perdues! The pleasure at finding life as you left it lasts about as long as mackerel fingers, it seems.

This might be coming from me being stuck here in August, and not somewhere on holiday. Again!

Gorgeous tales. My dad was brought up on Bembridge holidays as a boy and now we live opposite the IOW on the mainland. Did you go to the Crab Shack? x

Oh I have turned into my parents too. I enjoy going for long walks, sitting in the car eating a picnic while the wind blows outside, and correcting other people's spelling (whilst being very irritating when others correct mine).

Glad to read that you all had a brilliant, windswept time - and so beautifully described :-)

Linda Back in Canberra said...

Dear Mrs Trefusis, Your beautiful nostalgic picture only lacks the image of your family listening to the cricket commentary in the car on the way home - an essential element of an Australian Summer road trip. Today I told my children not to run with their knitting needles "or you will poke an eye out" - talking like one's mother is one thing, however catching a glimpse of oneself on a shop window and seeing one's mother is entirely different.

Sounds delightful! There are far too few seaside cafés where we rent the house in Duck, North Carolina. A thriving bar culture, but few seaside cafés. And my daughter doesn't appreciate sand, or surf. Ah, the childhood memories we're building.

Quite different from the halcyon days that you are imprinting on all the little T's.

This is just wonderful.

Sounds wonderful. My mum always said that doing things that might not seem fun become fun when they are a tradition, because you remember them fondly, fun or not. I think she's right, and I think it's another facet of our British black humour.

It sounds like a wonderful break. The mackerel pate sounds delicious despite the fingers. You make me want to go on holiday NOW!! xx

Wonderful news, Mrs Trefusis who so beautifully channels Nancy - the book that will doubtlessly be the final family memoir is out on the 7th of Sept: The Dowager Duchess of Devonshire's _Wait for Me: Memoirs of the Youngest Mitford Sister_. Cannot wait.

this is such a British post about a very British holiday. There is something very evocative about that certain kind of seaside holiday.

I am ashamed to say I have never been to the Isle of Wight but I would love to and do mean to.

Has anyone ever commented on the similarity between Mr Trefusis and the young Jimmy Greaves?

I really like what you have posted here, it is a very well written and great article that gets right to the point. You could use a little reworking of the blog layout though, but the design is overall very nice. Great job, Thanks!