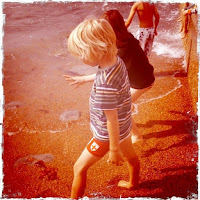 As a child I was deeply envious of friends who holidayed abroad, particularly the Bromsgroves who, every summer, would pack up their Volvo and drive off to the South of France, returning relaxed and happy, tan marks livid against Piz Buin bronzed skin. I wanted to be one of those families, off for a fortnight on a beach in Spain or France, the children left to their own devices way past their usual bedtime, whilst the parents got mildly wasted on Rosé or Sangria. But no. We went to Norfolk, or Dorset, or Devon. Our entertainment came straight from the pages of a Ladybird book, digging endless sandcastles and dragging shrimping nets through rockpools, punctuated by the odd trip to a National Trust house or the treat of a coca-cola and a packet of crisps in a pub garden. The sense was that there was something decadent - slightly degenerate even - about the Foreign Holiday: we were above such things, in the same way we were above having a pumpkin at Hallowe'en, and instead if we wanted a spooky lantern, we had to spend an entire afternoon hollowing out a turnip with a dessert spoon.

But now I'm a bona-fide grown-up and can choose my own holiday destination, do Mr Trefusis and I bundle the infant Trefusii into the Audi and head off for the fleshpots of the Midi? We do not. The early programming was too effective. Holiday heaven for me means the Great British Break and doing my best to repeat the highlights of childhood summers of the nineteen seventies. If there's a tea room to be visited, so much the better.
It means a spot of unspoilt coastline, preferably with a proper beach café. We have yet to try the crab tea, but I'm longing to. 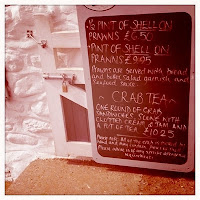 My childhood memories are, like everyone's I suppose, all shiny and golden, full of endlessly balmy summer's days. I tell a lie, there was a holiday in 1982 which was mostly full of thermos flasks, anoraks and windbreaks, but mostly there was sunshine - I promise you it's a myth that the weather in England is unremittingly and uncharitably wet.
This year's holiday is no different. So far, we have honestly had very nice weather, well, mostly - today decided to be the exception that tested the rule and indeed, it was like this, and I wasn't the only one who was glad I packed the waterproof bhurka-style pacamac. Anyway, here is Mr Trefusis, the day after we arrived, trying his best to pretend it's thirty five degrees as he reads his copy of The Week. 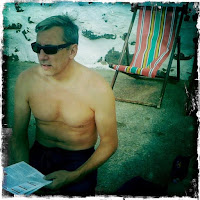 Why is it that fathers can read the newspaper - every section, even the Review and the motoring bit - whilst also 'supervising' the offspring. I have to start breathing into a paper bag if I take my eyes off them for an instant: He's entirely unconcerned that the children are hurtling into the sea fully clothed. 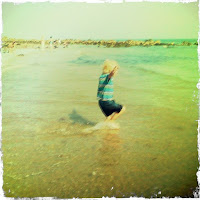 We get on with the lovely business of poking at rockpools: half afraid, half hopeful a crab might nip our fingers, but ready to settle for finding a whelk or an untethered limpet. 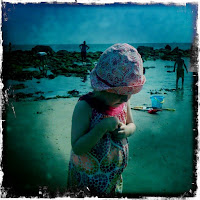 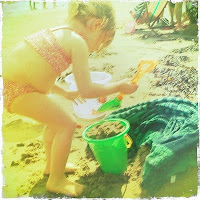 before working out that the water is actually really lovely after all, perhaps not quite lovely enough to swim in, although people were, but definitely perfect for paddling.

(with very many thanks to Belgian Waffling)

"Why is it that fathers can read the newspaper - every section, even the Review and the motoring bit - whilst also 'supervising' the offspring."?

You see, we men can multi-task after all, although I'm always amazed at how far a child can travel in the space of a paragraph. There have been occasions when I've actually had to get up from my chair.

in reply to Steerforth, and in answer to the original question -

Because the father knows that even if she has dared go 50ft for an ice-cream or something, mother is still watching the children, and they get lazy.

I am, I fear, a little slow, but I think the the new look of your blog is perfectly stunning. Bravo.

The hipstamatic ap seems perfectly tuned to capturing the nostalgia of an English seaside holiday, even one in contemporary times. Your pictures are marvelous.

Hope you're having a lovely time.

I love your new look, and you have made me yearn for a summer holiday instead of being stuck in this groundhog day of building ..enjoy xx

Er, can't believe I am the first to feel the need to point out just how hot and Daniel Craig looking Mr Trefusis is in that picture!

Dear Mrs T, I have been pining for a post by you, and what a lovely post, so true about fathers and supervision, though I am worse because I always get Chatting to Other People when supposed to be remaining alert and supervisory and meanwhile all hell breaks loose and I am exposed as the unfit mother I am; by the way Mr T looks v handsome, a cross between Cary Grant and Daniel Craig, in a good way..Bx

First of all, I've been meaning to tell you I love your new blog do.

Dear mrs Trefusis, I was missing your blog - but now I'm happy to know you're not busy with work, but with holiday. Have it nice and relaxing.
Your reader from Vienna (often holidaying in the UK...)

It is such a beautiful blog.

We honestly only had two holidays when I was a child. My dad would never take us anywhere at the weekend either as there was always "too much other traffic on the roads" (!!)

My lucky offspring currently average about 2 to 3 holidays a year due to divorced parents.....

Style At Every Age said...

All I remember is Butlins at Clacton and being scared to get in the Pool because I couldn't swim. I still can't. Then my parents split up so there was nothing else until my first 18-30 holiday - I never looked back!

Oh Mrs T, SNAP, for us it was Cornwall, always Cornwall...well occasionally Devon. Crabbing on windswept beaches, craft museums, clamshell ice-creams....never even a sniff of anywhere, or anything, foreign.

Still - doesn't seem to have done either of us any harm, no?

beautiful, love the way you write. and i love all these beautiful photos you have put up. x shayma

Lovely post and photos,we too enjoyed seaside holidays in Britain and the weather always seemed to be good..
Planning a holiday in Cornwall soon..

They came back in one piece from hollidays with mr trefusii in france..maybe because his friend PhD did the same as you, watching them all the time..
Take care

When I was a child, we spent summer holiday after summer holiday in France - which, when my friends were going to Disney World and the like seemed distinctly unglamourous and boring. Now, of course, I love France and could happily go again and again every year - in fact I've pretty much decided that we'll inflict the same thing on our kids when we have them. Funny what time does to you! But yes, so much is linked to memories and that child-like feeling.

Loved your holiday descriptions. 'Fraid we did a Bromsgroves, but we didn't get to have Daniel Craig on holiday with us. Great Mr T shot! x

The new look is a winner. I love to read your posts they always make me smile. I do the same thing and try and recreate childhood holidays. It never quite works for me though xx