Easy Jet is unlikely to ever make 'World's favourite airline' status: its 'no frills' approach is disingenuous to say the least: one has to box pretty clever to avoid paying extra for something. 'Have you got two bags?' shrieked the Gate Dragon, pointing an accusing finger at Jo's tiny carry-on and modest Anya Hindmarch handbag. ''You'll have to fit your handbag in your hand luggage'. If you're only travelling with hand luggage, I defy anyone to leave enough room spare to squash your handbag into it at the last minute. So into the hold went Jo's tiny carry-on bag for which she was charged forty pounds. I'm a little ashamed to say they didn't notice my handbag, so I scuttled onto the plane before anyone had the chance to reconsider waving me through. I think making 'low-cost' airlines work for you requires an awful lot of practice. However, since the flight to Marrakech only takes three and a half hours direct from Gatwick, I really mustn't complain. When I last visited the city, nearly fifteen years ago, you had to change planes at Casablanca and it took all day. Three and a half hours makes Marrakech a perfect weekend destination when you need a boost of heat and sun in the middle of the relentless drear of an English spring (six weeks of rain in London and counting). With direct access becoming increasingly easy it's no wonder the city has tripled in size since I last visited, with a huge Ville Nouvelle springing up between the airport and the Medina. I adored Marrakech the first time I visited - I wasn't wildly well-travelled outside Europe at the time and nothing prepared me for the extraordinary otherness of the city. Im always a little wary of re-visiting places that have had such a profound effect on me in case the intervening years have lessened the impact. But despite the influx of many more tourists and a much better modern infrastructure in the new parts of the city, the Medina's power to enchant is entirely undiminished. Once through one of the gates in the city's ancient walls, your senses are bombarded by exotic, magical sights, sounds and scents: the bright jewel colours of the barbouche and caftans for sale in the Souk, the cacophony of snake charmers, musicians, acrobats and magicians in the Djemaa El-Fna and the haunting sound of the regular call to prayer from the Koutoubia, the delight in discovering hidden doorways with exquisite, intricate Moorish carvings and beautiful tiling around the frames, the air perfumed with amber and spices from the many apothecaries, all of which promise to cure every ill from sciatica to lovelessness.
Despite odd 21st Century sights, like fake Louis Vuitton footballs and flip flops for sale and being contantly mown down by motorscooters in the labyrinthine alleyways of the Souk, there's a timelessness to it - tread the same path at any point during the last six hundred years and you could see the same crocodile and python skins hanging, the same jars of dried rose petals, cumin, saffron, the same carts piled with small, flat rolls, still warm from the oven, the same craftsmen tanning skins to be dyed and turned into barbouche, drink the same mint tea with the same Berber carpet seller. I love that: it's the perfect antidote to the churn and bustle and impermanence of London life, where everything seems to be an endless hunt for the new and the now, rather than a quest to find the beauty in small things, unchanged by time and technology yet still absolutely relevant.

Marrakech, for me, is like being cast into the middle of a gorgeous storybook. I don't mind where the narrative takes me and the illustrations are breathtaking. 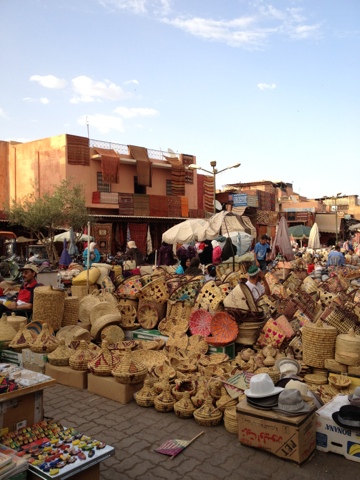