DEBORAH MOGGACH'S LATEST NOVEL, SOMETHING TO HIDE, AND THE BOOKS THAT BUILT ME 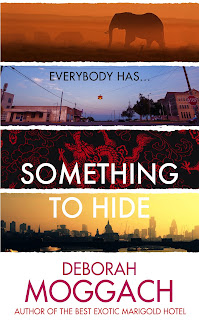 Something To Hide is Deborah Moggach's eighteenth novel. Whilst it has all her trademark wit, warmth and wisdom, it's undercut with a darker edge - the things we have to hide may be more troubling than a few weathered skeletons clanking in the closet.

It begins with Petra, whose love life has always been catastrophic. In her sixties, she's older, but no wiser about men - she entertains her best friend's husband with tales of her 'romantic disasters. From the safety of the marital bed, couples like to hear about the hurly-burly of the chaise longue' but the marital bed is far from safe, and they fall in love. Untroubled by guilt - after all, Petra reasons, Bev's had Jeremy for thirty five years and perhaps it's her turn - their affair trundles along as one might expect in a comedy of manners, until Petra is called to West Africa by Bev, right to the heart of darkness.
Moggach weaves the lives of three other women into the story, all of whom struggle with secrets and betrayals in their own way - Petra's best friend, Bev, whose husband she's been borrowing, and American Lorrie, cheated of her life savings and with her soldier husband away in the Middle East, she embarks on a vast deception rather than confess to the loss of the money.  In China Li-Jing is struggling with infertility and trying to understand exactly what it is her husband does on his West African business trips. No matter where you are in the world, it seems everyone has something to hide.
I first came across Deborah Moggach's work in Tulip Fever, set in Amsterdam at the height of the tulip mania that gripped the Dutch in the early seventeenth century, in which a painter and his sitter fall in love, and have always loved her writing. She's best known for The Best Exotic Marigold Hotel, but has also written many screenplays, including my favourite Pride and Prejudice (the one with Kiera Knightley - don't hate me) and television adaptations. I'm enormously excited that she will be November's guest at The Books That Built Me - tickets are available here
Posted by Helen Brocklebank at Monday, September 28, 2015