HANNAH ROTHSCHILD AT THE BOOKS THAT BUILT ME


When John Updike wrote, 'a writer is just a reader turned inside out', he distilled the essence of The Books That Built Me: as an author, how do the books you cherish set an unconscious agenda for the books you write?

All writers have a magic library within them, and all writers are necessarily great readers. One of the great privileges of hosting The Books That Built Me is to read the books an author has chosen and then to try to follow a golden thread back into the books they write, to scratch gently at the connections, to peek inside the writerly mind, part literary detective, part psychologist, delving into their readerly selves. 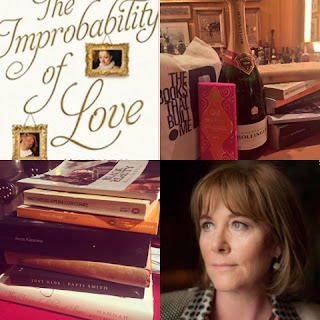 My guest at Annabel's this week for The Books That Built Me was Hannah Rothschild, documentary film maker, writer and Chair of the National Gallery. Her first novel, The Improbability of Love, is a vivid satire of the art world, where the stakes are so high, people are inevitably compelled to behave in an unbecoming manner. It tells the story of Annie McDee, sweet, single and skint, recovering from the disappointment of a  failed relationship, who buys a grimy, unprepossessing painting in a junk shop. Little does she know it's 'The Improbability of Love' a lost masterpiece by Antoine Watteau, one of the greatest painters of the 18th Century. We're drawn immediately into a cut-throat and deeply glamorous world, peopled by exiled oligarchs, billionaire collectors and unscrupulous dealers, the super wealthy and the avaricious, all of whom would do anything to possess the painting. Guests from Tatler drank Bollinger and nibbled on Prestat's Cardamon and Orange milk chocolate, because at Annabel's, one can't survive on literary chat alone. 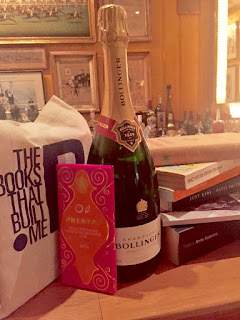 The Improbability of Love is part-narrated by the painting itself - which brought us immediately into Black Beauty [1], whose first person equine narrator never strikes one as in any way odd as a child. I can think of a few books narrated by animals (Andrew O'Hagan's Maf the Dog, White Fang etc), but a book narrated by a painting has to be a literary first. The idea that a painting could tell a story if only it could speak came to Hannah when she was quite a small child, being taken to art galleries by her father.
Who hasn't read Black Beauty through buckets of tears? In Love in a Cold Climate [2], Fanny - who Mitford fans first meet in the preceding novel, The Pursuit of Love - is told by the Lord Montdore that she used to weep over the Little Match Girl 'Perfectly untrue,' thinks Fanny, 'Nothing about human beings ever had the power to move me as a child. Black Beauty now - !' Love in a Cold Climate is one of my favourite of Nancy Mitford novels (so satisfying, even on the fiftieth re-read), possibly because of the glorious and improbable love affair that kicks off between grand Lady Montdore and Cedric, the long-dreaded Nova Scotian heir, who turns out to be a beacon of charm and apotheosis of glamour, with his blue goggles ('made for me by Van Cleef and Arpels') and ritzy suits piped in contrasting colours. On re-reading LIACC in the context of TIOL, Cedric reminds me hugely of Barty, equally glamorous. Barty is one of my favourite characters in Hannah's book, not least because he is so redolent of delicious Nicky Haslam, without whom no party is complete, and who was the subject of one of Hannah's television documentaries.
Barty is quite Nicky Haslam, says Hannah, but, whilst the book is rooted in a world with which she is very familiar, it's not a roman a clef - though much like readers of Evelyn Waugh's Scoop [3] wondering whether Lord Copper is based on Lord Beaverbrook or Lord Rothermere, it's almost impossible to read it without trying to match characters to Real People. TIOL is not without its autobiographical elements - Annie has moved to London to try to mend a broken heart as Hannah herself once did, recording her thoughts and feelings in a notebook with a canary yellow cover to which she returned many years later when writing the novel to recapture the sense of being lost, lonely and unloved in her portrait of Annie. Anna Karenina [4] is a book that captures the desperation of love so perfectly one can hardly bear to re-read it. But, as Hannah discovered, some books are entirely different on a later reading, and second time around what came out of Anna Karenina for her was less the central tragedy of Anna's love for Vronsky, but the portrait of a society in the middle of enormous social change.
Hugh Trevor-Roper's essays [5] remind Hannah of her father, himself an extraordinary polymath, who read History under Trevor Roper at Christ's College Oxford. The essays are short, precise, and combine extraordinary erudition with beautiful simplicity - what an astonishing talent to be able to express complexity with perfect economy. Hugh Trevor-Roper's reputation as a great historian of Nazi Germany (amongst many other areas of expertise) lead us to explore the dark secret at the heart of The Improbability of Love, the subject of Nazi looted art. Hannah's family had more artworks stolen by the Nazis than any other - over 5000 individual pieces were taken from the French Rothschilds alone. Our discussion about art, its value, its collectors and its makers brought us to Just Kids [6], Patti Smith's memoir about her relationship with Robert Mapplethorpe. Just Kids is important to Hannah because it's a book that she and her daughter connect over, but I suggested if it might not also be because of what Smith has to say about artists and the creative process - Smith, like Hannah, is taken by her parents to an art gallery as a young child, where she is transfixed by the Picassos - 'Secretly, I knew I had been transformed, moved by the revelation that human beings create art, that to be an artists was to see what others could not'. Smith and Mapplethorpe are intensely in love, a devotion that transcends his homosexuality and their relationships with other people, and is the bedrock of their development as artists - a beautiful paradigm of the improbability of love.

The Improbability of Love, Hannah Rothschild, is published by Bloomsbury. RRP £14.99