ON BEAUTY AND LOOKING YOUNGER (PART ONE) 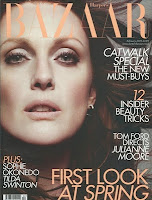 'What have you done to your eyes?' Asks Mr Trefusis, staring gloomily at me as I'm on my way out to a party, 'I assume it's fashion.'

Whenever Mr Trefusis says 'fashion', it's always as if there are vast inverted commas around the word, making it sound as if it's something I've just invented to tease him.

Trefusis Minor adds his ten pence-worth: 'I like your lipstick, Mummy, but not your eyeshadow.'

And with that, my self-esteem hits the floor: why couldn't he say 'You look beautiful, Mummy, like a beautiful shiny star, twinking in the night', like he did once when he was four. Ok, so that was a peculiarly extravagant compliment, but one can usually rely on Trefusis Minor for a positive comment whatever the occasion. Not this time, apparently, though in fairness, it's sweet he's trying to be tactful. Trefusis Minor has quite firm views on makeup - I came home from work one day and got changed to go running and he ran after me to tell me that I should take my lipstick off before I went out because 'Red Lipstick is only for glamorous parties'. He's quite ahead of the game, even if I am a little concerned that he knows rather more about beauty than is usual in a boy of his age.


'It's deeply fashionable,' I say, naturally on the defensive, 'It's the last word in fashion, actually. They're Dior's new colours and I've copied the look from Harper's Bazaar. Blue is back.'


'Hmmm,' says Mr Trefusis, an eyebrow vanishing into his hairline, and goes back to playing with the cursèd Wii.

I tuck my sparkly clutch firmly under my arm, and flounce off grandly into the taxi waiting to take me to some work do or other. Yet I no longer feel quite so fashionable. I squint into the tiny mirror above the door of the cab and am slightly aghast: The bold drama of a pale cobalt eye with an equally colourful lip looked amazing when done by Aaron de Mey for Bazaar, but looks decidedly Barbara Cartland on me. I'm just wondering whether to tone it down a bit by scrubbing at my eye with an old bit of tissue - probably the same one I spat on earlier that day when removing nutella traces from the Tiniest Trefusis's face - when I arrive and forget all about it.

A few days later, it comes back to me. Mr Trefusis was right - perhaps these kinds of directional looks are like very up-to-the-minute clothes - only the very young or intensely trendy can carry them off. If you are neither, then probably one should bite the bullet and go for make-up that makes the best of what you've already got, rather than spoiling the lily with a hefty gilt impasto.

And frankly, the very best kind of makeup at all is not the edgiest runway look, it's the kind that takes years off you, like in the picture of Julianne Moore on the cover of February British Harper's Bazaar (above). She's had a little light airbrushing but I have it on good authority that in Real Life she looks utterly amazing for 49 and has eschewed the dark arts of the cosmetic dermatologist to boot.

Christian Dior once said, “I dream of saving women from nature”, and that seems to me to be the essence of beauty. I don't want to appear in front of anyone in the same dishevelled, unmade-up state that greets me in the mirror every morning, natural as that is: I want to make the best of myself, even if that's doesn't immediately scream that I'm au fait with the latest Moschino eye, or the Bottega Veneta brow. Most of all, I want to look young(er) and fabulous, not like an old has-been try-hard.

This post was going to neatly segue into a list of tips and techniques for turn back the clock make-up, but I've run out of time somewhat. However, in the very next post I promise to impart everything I've picked up whilst working with make-up artists and with some of the very best magazine beauty editors.

Look forward to the tips and was much amused by the minor's views.

Will look forward to the next post- and I thought Julianne looked stunning in that picture/ shoot. Sure I know they airbrush but you can tell that a lot of it is natural

Now in my forties I seem to have completely lost the ability to apply anything but the most basic of maquillage; a skill that in my twenties seemed so natural.

Have a full selection of make up ready and waiting for your next post.

Love this post and completely agree on not doing 'on trend' make-up. I tried once very young and gave up. Eyeliner and mascara, job done. Any tips always gratefully received!

I totally agree. I got a bit carried away with the smoky eyes at New Year's Eve after watching a Lauren Luke video. When I put on my leopard print coat Mr TNMA said, 'But I thought you said one should never do double animal?' Eh? 'The leopard coat and the panda eyes!'

This post did make me laugh. I've also tried very 'on-trend' make up looks only to be met with mystified looks (if I'm lucky!) Looking forward to your tips...

Look at this way - you could have had the make-up and the Hellman's!

Very nice post, unfortunately the same happens to me, and my daughter is 3. I've been trying in vain to find a red lipstick, which is not only classic but somewhat trendy (or are we past the trend now?), well the latest attempt was a classic Chanel red. I put it on, blotted, tried to make it look as natural and good as possible, and was ready to face the world. The boyfriend informs me that I look great. Then my daughter comes around and tells me she doesn't like my lip stuff. And then the boyfriend also says he doesn't like it. So I go scrub it off and put on some pink. Ugh.

Style At Every Age said...

Not so sure I believe she has only been lightly airbrushed, I need to see her in the flesh!

My 6 year old son is also an expert on my make up (and clothes) and actually has a very 'good eye' although I can usually guarantee that his favourite will be the brightest and sparkliest choices.
I have only recently discovered your blog, a friend directed me to it, and I am loving it so much.
BTW do you have any tips on dealing with the dreaded moue? Mine has become like that of Magnum PI since I turned 43.

Can't wait to hear your recommendations on make-up. I fear I'm quite dull when it comes to mine. Nude by day, smoky by night, with the occasional sparkle for very special evening.

PS. Don't ever take any notice of children's views when it comes to fashion. After the age of five they become the most conservative of creatures. Hxx

Julianne Moore- oh my god. Yesterday I read an interview with her, apparently she's pretty good in the flesh too, for 50.

While you're imparting tips, can you give me an idea of basic basics? I own mascara, eyeliner and a powder and thats it...part of the problem is the lack of a good light over the bathroom mirror...I frequently leave the house feeling cute- but then direct sunlight hits me...like those elderly ladies, eyesight failing, who go out looking like Barbara Cartland on a bad day...

As someone who only ever goes down the Bobbi Brown route, looking forward to hints on looking current but not ridiculous with something other than bloody nude.

As someone who appears to own the whole MAC counter at Selfridges, I am lazy when it comes to make-up.

I'm never without a bright lipstick and occasionally I'll wrestle with the eyelash curlers and mascara.

I'm digging out my MAC blues to have another go at looking fashionable.

I look forward to your tips.

I'm sure you looked divine sweetie. I really need to brighten myself up a bit, so eagerly await next post, goodie goodie.
WEM xx

I think that deserved a VERY long time out. A year or so?
I was horrified yesterday when a lady in my dance class who is eight years older than me said "We're the same age, right?". I was wearing 'sensible' makeup at the time (like her) and it made me RUN home and put on some stupid sparkly stuff and an inappropriate dress. I think, though, at a certain point you have to make a choice between elegant (being remembered, isn't it?) or saying 'fuck it' and having a laugh with the glitz. It depends how much stock one puts in dignity vs. rebellion

Oh, I can totally relate to this with various make-up experiments resulting in total failure. But you're right about the best make-up being the least trend focussed. And really, I can't go past a good slathering of Beauty Flash. xx

I loved this. I think I need to stop playing the mommy card as a mostly SAHM and start sprucing myself up a bit. I can't wait for your tips.

When I read this, I ironically thought of the perfume ritual in Somaliland where we would stand over a smoking incense pot in traditional dress to infiltrate the scent everywhere on body and clothes, and then spray tons of strong perfume into our hair.

I discovered that this ritual is non-transferrable to different cultures when I decided to go all out as a Somali spice bomb in New York City. I quickly cleared a large Ground Zero radius on the subway as people fled from my person, hands over mouth.

Humiliatingly funny, but unfortunately not a unique beauty gaffe for me.

Lovely post you can always count on minors to tell it as it is :) I must admit after an experiment with lavender shadow meant to be the latest and most anti ageing but in reality more drag queen I stick to what I know works. Looking forward to your tips though x

So true! Every time I get bored of my tried and trusted everyday looks and try something more directional I seem to come a cropper. What appears to work in my trusty mirror at home ends up ever so slightly slightly wrong in the real world. Bright coral lipstick was my last mistake... never again.

You speak volumes. Very nicely put. Wasn't it Wilde who quipped something to the effect that fashion was something so horrid that it had to be changed once a season? Find what works wonders for you and stick with it.