Down And Out In Paris And London 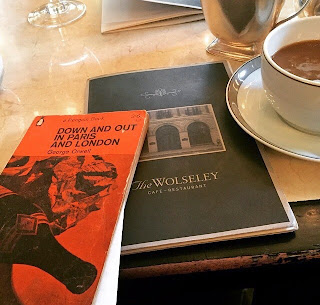 Fortunately for me, I'm neither down nor out in London, and nor was I earlier this month when in Paris on business. And one can hardly call reading a book over coffee in The Wolseley slumming it. I'm counting my blessings and frantically swotting for next week's The Books That Built Me with marvellous Lissa Evans, author of Crooked Heart. I don't think it will spoil anything to tell you one of the books she's chosen is George Orwell's Down and Out in Paris and London.

'Poverty is what I'm writing about,' says Orwell, describing the people he meets in Paris, 'the slum, with its dirt and queer lives, was first an object lesson in poverty, and then the background of my own experiences... For, when you are approaching poverty, you make one discovery which outweighs some of the others.  You discover boredom and mean complications and the beginnings of hunger, but you also discover the great redeeming feature of poverty: the fact it annihilates the future.'

Down and Out in Paris and London is an object lesson in poverty and it's full of vivid, Rabelasian characters - there's an extraordinary Russian called Boris for whom 'war and soldiering were his passion' so much so that he favours a particular cafe simply because there's a statue of Marshal Ney outside, and he prefers to get out of the Métro at Cambronne - 'though Commerce was nearer, he liked the association with General Cambronne, who was called upon to surrender at Waterloo, and answered simply, 'Merde!''

Orwell's first book is a memoir rather than autobiography, 'faction' rather than roman à clef in that it's a much tidied up, novelistic account of his time in Paris - working as a plongeur at Hotel X and down but probably not out - and in London living as a tramp. Orwell's experiences help develop his political focus and give him a keen appreciation of the precariousness of life on and below the bread-line

'At present I do not feel that I have seen more than the fringe of poverty. Still, I can point to one or two things I have definitely learned by being hard up. I shall never again think that all tramps are drunken scoundrels, nor expect a beggar to be grateful when I give him a penny, nor be surprised if men out of work lack energy, nor subscribe to the Salvation Army, nor pawn my clothes, nor refuse a handbill, nor enjoy a meal at a smart restaurant. That is a beginning.'

Rejected first by Jonathan Cape and then by T.S Eliot at Faber, it was published by Victor Gollancz who gave Orwell an advance of £40. Critical reactions were slightly mixed - Cyril Connolly's 'I don't think Down and Out in London and Paris is more than agreeable journalism' is particularly sniffy, and it may not be Orwell in his pomp, but it's a brilliant, radical, and by turns painful and funny account that takes the lid off the life of people who are usually without a voice, those at the outer fringes of society, dispossessed by poverty. It should be required reading for anyone who uses the expression 'hard-working families' to perpetrate the pernicious myth that the poor is divided into 'deserving' and 'undeserving'.

To discover why Down and Out in Paris and London is one of the Books That Built Lissa Evans, join us at the Club at Cafe Royal on 28th April. Tickets available here or by clicking the BooksThat Built Me logo to the right of this page. 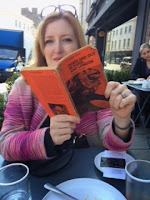