Writing requires great selfishness and great focus - it helps if you're so burned up by the words trying to burst out of you that you can do nothing else but sit and write. I am not like that. I have no self-discipline at all.  I started writing a book in 2009 and I'm still writing it, not because I've endlessly tinkered with every line in pursuit of some Flaubertian marvellousness, but because I've had to prioritise the business of earning a living - not so much the pram in the hall as the spectre of the bailiffs in the street.

Anyway, six years have gone past and every day I don't finish it I berate myself more for my failure to finish anything, it becomes a symbol of a wider laziness, of failure.  It's also, partly, because whilst I'm still writing it, it could still be brilliant - I'm still a contender - and I'm scared of the spirit-crushing defeat if I gaily write 'The End' only for everyone to find it so terribly wanting.

The longer I spend writing it, the more the fear grows. The more time I invest in it, the more afraid I am of it coming to nothing.

Various things have happened over the last few weeks that have made me think it's time to get over myself and just bloody finish it. I lost a big piece of business, and the sensible thing would be to fire up the selling cylinders and get on with replacing it at once. But, Mercury being retrograde, I'm committing to a different approach - I will give myself until August to write the rest of the book. A writer isn't a writer unless they write. I'm not trying to write a whole book in ten weeks, but a quarter of one. I must try to be more scared of not finishing it than of finishing it. I must allow myself some ambition.

Anyway, I'm reading Hemingway's A Moveable Feast - I'm making slow progress because there is something so apposite on each page, I keep stopping to write it down. Maybe it's the iChing for writers ... 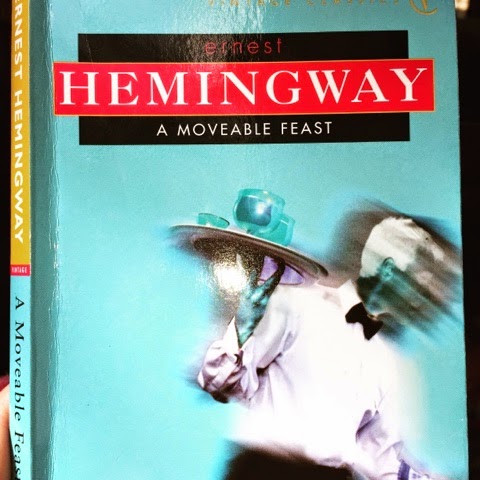 "I always worked until I had something done and I always stopped when I knew what was going to happen next. That way I could be sure of going on the next day. but sometimes when I was starting a new story and I could not get it going, I would sit in front of the fire and squeeze the peel of the little oranges into the edge of the flame and watch the sputter of blue that they made. I would stand and look out over the roofs of Paris and think, 'Do not worry. you have always written before and you will write now. All you have to do is write one true sentence. write the truest sentence you know.'."
Posted by Helen Brocklebank at Sunday, May 24, 2015

Get it finished and get it out there in the world. Says me, who has not completed any writing project that she has started lol! Writing that 'one true sentence' can take a very long time :)

Do you have the ending in your head - if so get it out, what's the worst that can happen, really? And then you can start on another one. Yesterday a stranger sent me a poem I wrote 23 years ago (how weird is that), it took me a while to recognise myself, I was fearless then and words flowed out of me. Now I fret and worry and write nothing. I know which me I’d rather be...
x

Let's meet sometime soon and we can talk about how our books are going, and maybe inspire each other to reach the end !