I first read Brideshead Revisited when quite a young teenager, in love with Waugh's floppy haired bright young things, up at Oxford seemingly for nothing more arduous than to be sick through each other's windows, or recite The Waste Land from balconies,  or carry around bears called Aloysius. The television programme was on ITV but I was away at school so was only ever allowed to stay up for half of each programme, so had to read the book to find out what was going on.
Now, that summer term with Sebastian, it seemed as though I was being given a brief spell of what I had never known, a happy childhood, and though its toys were silk shirts and liqueurs and cigars and its naughtiness high in the catalogue of grave sins, there was something of nursery freshness about us that fell little short of the joy of innocence.
Anyway, my Pollyanna-ish teenage self, combined with watching half of the dramatisation gave me quite the wrong impression of Waugh's novel.
I've read it several times since, and each time I read it it's a different book: it wasn't until I read it at around the same age Charles Ryder is at the beginning of the novel that its melancholy genius really hit me.
Anyway, Brideshead Revisited was only thirty seven years old when I first read it. This year it celebrates its seventieth birthday, and I think it truly is Waugh's triumph. Don't be distracted by the dreaming spires and the decadent beautiful aristos, it's about lost innocence and loss, about disappointment and not fulfilling one's potential. Forget all that stuff I always write about the good ending happily and the bad unhappily, I think Brideshead is alluringly tragic. But I've just been mending my copy with sellotape (I'm a terrible breaker of spines and once the glue goes brittle, pages fly out like moths when you open them) ready to start re-reading it in preparation for Alex Preston's Books That Built Me on 2nd June, and perhaps I'll discover it has transformed itself yet again into quite a different book from the one I think it is. 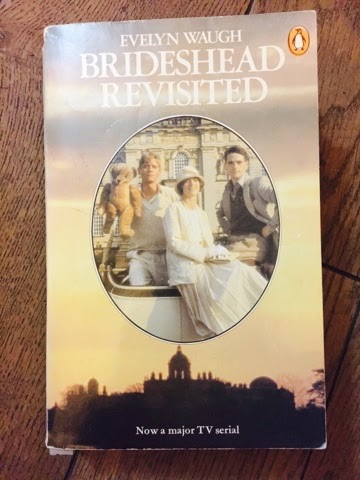 That cover takes me back to school as well. My copy has suffered from being dropped in the bath but still is well loved.

IT's a perfect example of how ones perspective changes with age. I too read it first as a teen and it was easier to focus on the bright young things but oh the melancholy of middle age.Now elderly, it's unbearably sad. I find the same in Kristin Lavransdatter; does anyone still read that, I wonder?

I teach this novel in my modern lit class (in early September) and we always start off with a picnic a la Sebastian and Charles, with sparkling juice and strawberries instead of Champagne and plovers' eggs. Aloysius, a holdover from my undergraduate days, comes too.

I've read it twice and like you, on very different levels. Like you I was a teenager when it was on TV (and I was totally in love with Jeremy Irons and Anthony Andrews) so I was very carried away with the whole glamorous Oxford thing. I always remember that Waugh was disparaging about it in his later years too, but I still love it.

I first read Brideshead before I went up to Oxford, and was looking forward to some semblance of the decadence and glamour and couldn't wait to be part of that glittering world.
After Oxford the entire book was this tragic indictment of how places can change you, especially since I fell in with a rather wealthy Catholic set of friends and it all just felt a little real. It's a beautiful book though.

Kristin Lavransdatter sounds absolutely brilliant - I'm sorry that I had not been aware of it until now: it sounds like a must-read. Thank you

I was known at university as 'Bridey' because of my obsession with the television series (hopefully rather than any resemblance to Sebastian's dull older brother), but who wouldn't be captivated by the early episodes' depiction of an idealised youth? Reading the novel in middle age is heartbreaking in more ways than one.