ALEX PRESTON, IN LOVE AND WAR (AND ALSO AT THE BOOKS THAT BUILT ME) 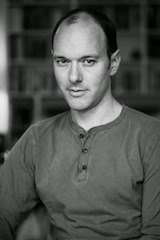 I write this sitting, not in the kitchen sink, but in 9F of a British Airways flight back from a business trip to Italy, trying to not to let the passengers either side of me see that the last pages of Alex Preston’s ‘In Love And War’ are making me cry.

Quite by chance, an appointment with Salvatore Ferragamo took me down the Via Tornabuoni in Florence, where so much of the first part of the book is set, I walked past St Gaetano, 'ugliest church in Florence' and longed to have the time to pop into Procacci, where raffish Gerald promises to take Esmond, In Love and War’s protagonist, for 'milk rolls and jam'. There's something magical about a literary itinerary, particularly an unintended one: it gives you a sense of complicity with the text, of seeing what it has seen.

In Love and War is the moving, exactingly researched, exquisitely written story of Esmond Lowndes, son of a leading light in Oswald Mosley’s British Union of Fascists. Caught in flagrante, he is sent down from Cambridge and despatched to Florence to set up a commercial wireless station for the British Union of Facists, to raise money from advertising and to promote the relationship between Italian and British Black Shirts. His first days in Florence, living at the British Institute on Via Tornabuoni, are idyllic, all very Brideshead-in-Italy, but when a party to celebrate the coronation of George VI is violently broken up by fascists, the brutal realities of Mussolini's Italy start to make themselves felt. As war comes, Esmond is drawn into the resistance, and falls for Ada, his aide de camp at Radio Firenze; their love becomes a courageous counterpoint to the terrifying weight of war.

I don't want to talk too much about plot, it's there, and it's gripping and marvellous and has all the right kind of narrative arc and drive and so on. It's more than plot that marks this book out as the work of a stunningly accomplished writer: In Love and War is about ideas and ideologies and how both are compromised by the realities of love and war. It's also a novel that's deeply engaged in the business of writing: all of its characters with the exception of Esmond and Ada are real people, which brings its own challenges, and it uses letters, telegrams, and transcripts of recordings alongside more conventional narrative techniques as an original and effective story-telling devices.

Preston has been compared to Hollinghurst and to Forster, and I think, with In Love and War, the comparisons are justified. He is a writer whose literary skill builds with each book he publishes, and we have yet to see the best he is capable of.

Hear Alex Preston discuss the books that made him a writer at The Books That Built Me on 2nd June at the Club at Cafe Royal. Tickets are £26.99 (plus eventbrite fee) and include a copy of In Love and War, a glass of Bollinger, Prestat chocolate, and a six month subscription to Tatler.